A ferry carrying more than 1,000 Syrian refugees has left the Greek island of Kos to the mainland, where the migrants will continue their journey to other parts of Europe.

The Greek government-chartered vessel made the journey on Wednesday, as the country’s coast guard rescued hundreds of migrants in more than a dozens search-and-rescue operations off the Aegean Sea.

Authorities had used the ferry as an accommodation and registration centre for migrants.

The ship carried 1,308 passenger from Kos, then headed to nearby Leros where it picked up hundreds more. It was to continue to the island of Lesbos to pick up hundreds more before setting sail for Athens.

The ship was expected to arrive in the Greek capital’s port of Piraeus early on Thursday, the coastguard said.

Meanwhile, separate coastguard operations also picked up 534 more migrants off the islands of Lesbos, Chios, Agathonissi, Samos, Farmakonissi and Kos in the 24 hours to Wednesday morning – and another 108 later in the day off Agathonissi and Chios.

Those numbers do not include the hundreds more who managed to reach the islands on their accord in overcrowded dinghies.

Separately, the coastguard said a little boy, about 2 or 3 years old, was found unconscious in a dinghy spotted by a patrol helicopter carrying 54 migrants off Samos.

A coastguard vessel picked up the group and the child was taken to a hospital, but he died, the coastguard said. Authorities said an autopsy would be carried out.

Greece has seen record numbers of refugee arrivals this year, most fleeing conflicts in Syria and Afghanistan and arriving on Greek islands from the nearby Turkish coast.

About 160,000 migrants have reached Greece so far since January, compared to 43,500 for all of 2014, according to figures from the UN refugee agency. More than four-fifths are from Syria.

RELATED: Germany expects up to 800,000 migrants this year

While cheap inflatable dinghies with small engines are the predominant method used by smugglers to reach Greek islands, groups of refugees have also paddled the several kilometres separating some of the islands from the Turkish coast.

One smuggler was arrested on Wednesday after transporting two migrants to Lesbos on a jet ski, the coastguard said.

Few – if any – of those who arrive want to stay in Greece, which is reeling from a financial crisis and has an unemployment rate of more than 26 percent.

Instead, they head to Greece’s northern border with Macedonia, cross the Balkans and head to more prosperous European countries, particularly Germany and the Scandinavian countries.

Short-staffed and cash-strapped authorities on islands have been overwhelmed with the sheer numbers of daily arrivals.

With the tourism season at its peak, another problem has arisen – regular ferries are fully booked with holidaymakers, meaning thousands of refugees have been unable to find tickets to get to the Greek mainland. 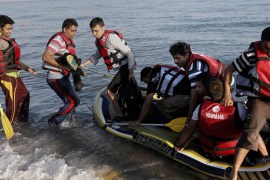 Hundreds arrive daily at Kos, where they must wait for paperwork to allow them to move on to other parts of Europe. 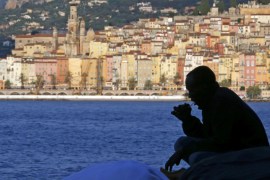 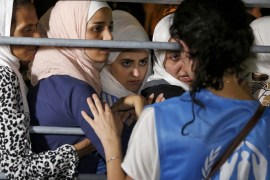