The United Nations humanitarian chief has condemned attacks against civilians in Syria, a day after more than 100 people were killed in what activists said were regime air raids on the rebel-held suburb of Douma, near Damascus.

“I am horrified by the total disrespect for civilian life in this conflict,” O’Brien said, a day after one of the bloodiest incidents in the four-year war.

O’Brien said he was “particularly appalled” by reports about Sunday’s air strikes on Douma that reportedly killed at least 110 civilians, and said those attacks “must stop”.

Syrian opposition activists have called those air strikes a “massacre”. In one makeshift clinic in Douma, whole sections of floor were covered with rows of the dead, as volunteers worked to wrap each victim in a white shroud.

Other areas of the Damascus countryside like Ghouta were also reportedly targeted, she said.

“[The government forces] are trying to send a message to the civilians that they will be punished for the actions of the rebels,” our correspondent said.

There were no immediate reports of casualties in the latest strikes.

The Syrian regime has been trying to push back against rebel-held territories, in order to protect the capital Damascus.

At least 300 other people were also injured in the strikes on Sunday, with the death toll, most of them civilians, likely to rise as many of the wounded were in a serious condition, the UK-based Syrian Observatory for Human Rights said.

Firas Abdullah, a local photographer in Douma, told Al Jazeera that the market was the main meeting place in Douma.

“The market has always been crowded with people buying and selling to make a living,” he said.

The attack on the market is the second in a week. On Wednesday, air strikes on the area left at least 27 people killed, Abdullah said.

A video posted online by activists of the aftermath of the attacks showed an intersection strewn with rubble and twisted metal.

The fronts of several buildings nearby appeared to have been sheared off by the force of the blasts, and several vehicles were overturned and crumpled amid the rubble.

A local organisation posted the following video, saying it was from the aftermath of the attack:

Meanwhile, Russia and Iran’s foreign ministers held talks in the Russian capital Moscow on Monday, to discuss the way forward on the stalled Syria peace talks.

Syrian opposition leaders and their foreign backers have insisted that President Bashar al-Assad should not have any role in a future government, something that the Assad regime had rejected. 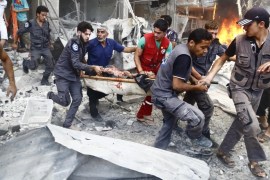 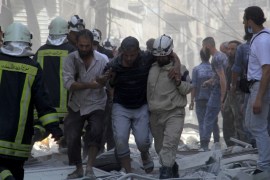 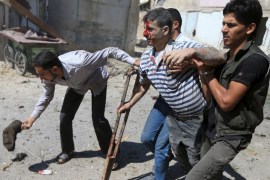 Scores killed in Syria ahead of Iranian FM’s visit