At least three people have died and 11,000 have had to be evacuated from their homes in the Buenos Aires province of Argentina following heavy rain.

The evacuations have been necessitated by rising river levels following unseasonal torrential rain across the province.

Up to 350mm of rain fell in just a few days – this compares with an average for the entire month of August of just 60mm.

The Lujan, Areco and Arrecifes rivers have all overflowed. The Arrecifes reached a record level of nine metres, nearly twice its normal level.

The flooding has submerged the rich soils of the pampas. Argentina is one of the world’s largest producers of soybeans, corn and wheat and this unseasonal rainfall is expected to hamper the planting of the wheat crop.

Argentina is no stranger to deadly flooding. In April 2013 severe storms dropped almost two months’ worth of rain in just a few hours. Flash floods were responsible for the deaths of 88 people, most of those in Greater La Plata.

As recently as March this year, 12 people died after heavy rain hit the north of the country, causing severe river flooding.

Further heavy rain is expected to continue to swell river levels on Wednesday and Thursday before drier weather returns across the region. 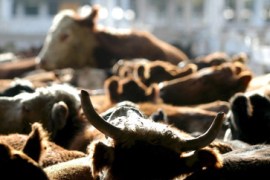 The soya bean could provide the answer for country’s under-pressure farmers.