As an essential pollinator, honeybees are responsible for helping produce about one third of the world’s crops, according to the United Nations.

The UN’s Food and Agriculture Organisation (FAO) estimates that out of about 100 crop species, which provide 90 percent of food worldwide, 71 of these are bee-pollinated.

But a global phenomena over the last decade, known as the Colony Collapse Disorder (CCD), has seen an alarming number of bee colonies die-off, fueling serious fears over the future of the world’s sustenance.

As the scientific community debates over the key causes of the collapse, a growing number of movements have pointed the finger at toxic pesticides used in conventional farming.

Al Jazeera spoke to Tiffany Finck-Haynes, a food futures campaigner at Friends of the Earth, a US-based global network of environmental organisations, about the effects and causes of the CCD.

Al Jazeera: How important are bees in the production of food and other basic needs?

Tiffany Finck-Haynes: Bees are essential for our food system and agricultural economy. One out of every three bites of food we eat is pollinated by honeybees. Bees and other pollinators are essential for two-thirds of the food crops humans eat everyday such as almonds, squash, cucumbers, apples, oranges, blueberries, and peaches. Bees contribute over $20bn to the US economy and $217bn to the global economy.

AJ: How severe is the fall in bee numbers across the world?

AJ: How is this decline affecting the ecosystem and food production?

Tiffany Finck-Haynes: Recent losses are staggering making it difficult for beekeepers to stay in business and for farmers to meet their pollination needs for important crops like almonds and berries. Without bees to pollinate our crops and flowering plants, our entire food system – and our fragile ecosystem itself – is at risk.

AJ: What are the main causes for the decline?

Tiffany Finck-Haynes: Pests, diseases, loss of forage and habitat and changing climate have all been identified as possible contributing factors to unsustainable bee losses. A growing body of science implicates neonicotinoid pesticides – one of the most widely used class of insecticides in the world, manufactured by Bayer and Syngenta – as a key factor in recent bee die-offs.

Neonicotinoidss can kill bees outright and make them more vulnerable to pests, pathogens and other stressors while impairing their foraging and feeding abilities, reproduction and memory. Neonicotinoids are widely used in the US on 140 crops and for cosmetic use in gardens.

Neonics can last in soil, water and the environment for months to years to come.

AJ: Are Genetically Modified Organisms (GMOs) a major factor in the crisis?

Tiffany Finck-Haynes: The majority of conventional corn, soy, wheat and canola seeds – many GMO – are pretreated with neonicotinoids. Just one neonicotinoid coated seed is enough to kill a songbird.

AJ: In which regions in the world are there growing movements to protect bees?

Tiffany Finck-Haynes: There has been a movement to protect bees in a number of regions of the world including North America, South America, Europe, Asia, Africa and Australia.

AJ: How are governments responding to these movements?

Tiffany Finck-Haynes: In the face of mounting evidence and growing consumer demand, a growing number of responsible businesses and government agencies have decided to be part of the solution to the bee crisis and are taking steps to eliminate bee-harming pesticides.

For example, in the UK, the largest garden retailers, including Homebase, B&Q and Wickes, have already voluntarily stopped selling neonicotinoids.

Based on recommendations by the European Food Safety Administration (EFSA), the European Union (EU) voted for a continent-wide suspension of several widely used neonicotinoids in order to protect bees, which went into place on December 1, 2013

In the US, in the past year more than 20 wholesale nurseries, landscaping companies and retailers, including the two largest home improvement retailers in the world, Home Depot and Lowe’s as well as Whole Foods and BJ’s Wholesale Club have taken steps to eliminate bee-harming pesticides from their garden plants and their stores.

The US Fish and Wildlife Service announced in 2014 that it will ban the use of neonicotinoids on all national wildlife refuge lands by 2016.

In June 2014, US President Obama established a Pollinator Health Task Force to develop a National Pollinator Health Strategy, calling on EPA to assess the effect of pesticides, including neonicotinoids, on bees and other pollinators.

In May 2015, the Task Force released its report, which aims at taking a number of steps to reverse pollinator declines. In April, the EPA announced that it would be unlikely to approve new or expanded uses of neonicotinoids while it evaluates the risks posed to pollinators.

In addition, more than 10 states, cities, counties, universities and federal agencies in the US have passed measures that minimise or eliminate the use of neonicotinoids.

In Canada, on July 1, Ontario became the first jurisdiction in North America to officially adopt requirement to reduce the number of acres of planted with neonicotinoid treated corn and soy seeds by 80 percent by 2017.

AJ: Can organic farming help save the bees? 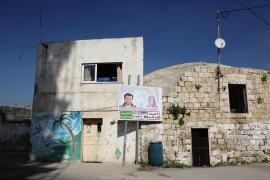 In Pictures: The Bees of Bil’in 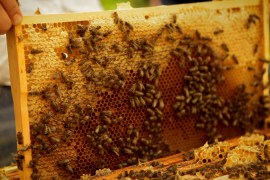 The Bees of Berlin

The German capital is witnessing a beekeeping revival, which is good news for the environment. 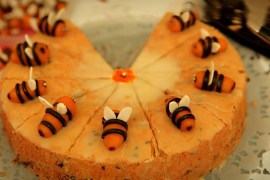