After repeatedly being delayed since 2011, the first round of Haiti’s parliamentary elections have gone off “fairly smoothly”, with most people able to cast their ballots across the country.

Voting began at 6am (10:00 GMT) on Sunday, with polls closing in most locations at 4pm. The elections were held for the chamber of deputies and two-thirds of the senate.

Al Jazeera’s Rob Reynolds, reporting from Port-au-Prince, said while there had been some reports of arrests and a number of polling stations had been closed because of violence, international observers believe the elections went well.

“The consensus is that while there were some problems – including more than two dozen polling places that were shut down for some reason or another – the process did go on fairly smoothly,” Reynolds said.

The number of stations that were closed due to violence represented less than two percent of the roughly 1,500 polling stations nationwide.

“Most people were able to cast their ballots. It all went reasonably well,” Reynolds said.

“The significance of today’s polling goes well beyond filling empty seats in parliament – political stability is the goal.”

Nearly six million voters in this mountainous country of 10.3 million were eligible to take part in the elections to choose 119 deputies and 20 senators from 1,855 candidates registered from 128 political parties.

Those who make it through Sunday’s first round of voting will then face off in a second round in October.

Reynolds said that the electoral commission will release voter turnout data some time in the next day or so.

According to Haiti’s electoral system, one-third of the senate is supposed to be renewed every two years, but following the cancellation of elections in 2012, two thirds of the seats were up for grabs.

RELATED: Haiti: A home among the rubble

The fragile democratic system was further weakened in January, when the country’s parliament dissolved after negotiations over a new electoral law failed and left Martelly ruling by decree.

Despite mass protests, the government waited until March this year to set a new date for this year’s voting.

A presidential poll is set for October 25, in a nation where President Michel Martelly, who is barred from running again by the constitution, has been ruling by decree.

There had been reports of electoral violence in the lead-up to Sunday’s polls.

In a report published on Wednesday, the National Human Rights Defence Network (RNDDH) warned of escalating clashes in the poorest nation in the Americas.

The organisation said it had already counted nine armed clashes, five murders and several incidents of beatings and stabbings in its tally of partisan violence. 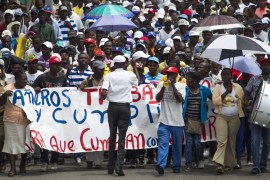 Thousands march in solidarity with undocumented residents of Haitian descent in Dominican Republic who face deportation. 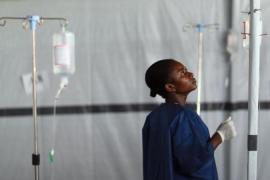 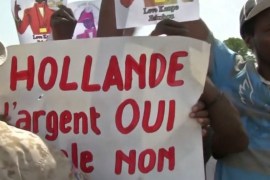 French president speaks only of moral debt and not financial compensation during visit to impoverished former colony.