One year after the shooting that cast greater scrutiny on how police interact with black communities in the United States, the father of slain 18-year-old Michael Brown has led a march in Ferguson, Missouri, after a crowd of hundreds observed four-and-a-half minutes of silence.

Those who gathered to commemorate Brown began their silence at 12:02pm local time, the exact time he died, for a length of time that symbolised the four-and-a-half hours that his body lay in the street after he was killed.

Two doves were released at the end. Police largely remained away from the ceremony.

Michael Brown Sr held hands with others to lead the march, which started at the site where his son, who was black and unarmed, was fatally shot by Ferguson officer Darren Wilson on August 9, 2014.

A grand jury and the US Department of Justice declined to prosecute Wilson, who resigned in November, but the shooting touched off a national “Black Lives Matter” movement.

Pausing along the route at a permanent memorial for his son, Michael Brown Sr said, “Miss you.”

He had thanked supporters before the march for not allowing what happened to his son to be “swept under the carpet.”

The march was not without incident, however, with gunshots heard during the event, police said.

It was unclear who fired the shots or the extent of any injuries, a police spokesman told reporters on Sunday, but initial reports suggested they were not aimed at the marchers.

RELATED OPINION: ‘One black, one white, separate and unequal’

About six shots were heard as 300 people made their way to a church on the outskirts of Ferguson as part of events to mark the death of Brown.

St Louis County Police Chief Jon Belmar said he was angry that a shooting had marred the weekend’s events in Ferguson, which have so far gone off without major incidents or arrests.

“These are the exact kind of events we try to avoid. I think it’s unfortunate. We are trying to keep everybody as safe as we can,” Belmar told reporters.

The march toward the church was halted while police and ambulances rushed to an area behind the church where the shots were thought to have come from.

Police later said that the shooting was unrelated.

Al Jazeera’s Kristen Saloomey, reporting from Ferguson, said that a number of activists have called for acts of civil disobediance to be carried out on Monday.

Brown’s shooting on August 9, 2014, touched off months of protests nationwide about the treatment of minorities by police. Several other unarmed black men have since died in cities including New York, Cincinnati, Baltimore, and Arlington, Texas. 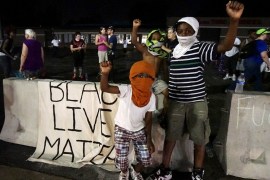 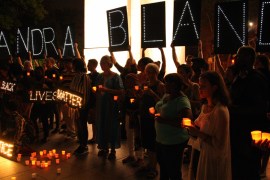 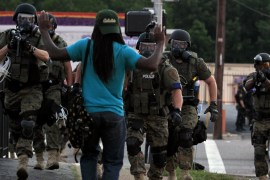 Michael Brown’s death at the hands of a police officer a year ago sparked an intense civil rights debate across the US.