One of Vietnam’s top leaders, General Secretary Nguyen Phu Trong, has met US President Barack Obama at the White House to discuss defence issues and the running conflict with China over disputed islands in the South China Sea.

Phu Trong is the first general secretary of the Vietnamese Communist Party to visit the US and the White House.

Obama told Phu Trong he would visit Vietnam in the near future, but did not specify when.

Washington and Hanoi – which ended their bitter war 40 years ago, and are marking the 20th anniversary of the formal normalisation of relations – are seeking stronger ties and the two leaders highlighted the progress made in the last two decades.

“Obviously there has been a difficult history,” Obama said. “What we’ve seen is the emergence of a constructive relationship that is based on mutual respect.”

The US president said trade ties, tensions in the South China Sea over Beijing’s territorial claims and the thorny issue of human rights had been raised.

“We discussed candidly some of our differences around issues of human rights,” Obama said, expressing confidence that any “tensions can be resolved in an effective fashion.

Trong described the talks as “cordial, constructive, positive and frank,” and also qualified their talks on trade and rights as “candid”.

Without explicitly referring to China, he raised concerns about recent activities in the South China Sea “that are not in accordance with international law”. 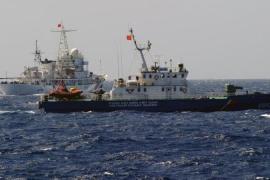 Easing of 40-year-old ban, applicable only to maritime equipment, comes amid growing naval challenges from China.