US President Barack Obama has said that the US-led coalition battling fighters from the Islamic State of Iraq and the Levant (ISIL) was “intensifying” its campaign against the armed group’s base in Syria.

Speaking at the Pentagon on Monday, Obama said that recent territory losses by the ISIL group show that the armed group will be defeated, but added that the fight will be long.

The US-led coalition has stepped up its efforts in Iraq and Syria, with some of the heaviest bombing since it began its strikes in September last year. At least 19 US-led coalition air strikes have been carried out in the last 24 hours.

Air raids have been carried out in 11 locations in Iraq: they are the oil town of Beiji, the cities of Fallujah, Haditha, Kirkuk, Makh-mur, Ramadi and Sinjar. Coalition strikes have also targeted eight ISIL positions in Syria: near Hasakah, Raqqa, Kobane and Aleppo.

The US president says he is determined to destroy the group, and says regional players in the Middle East are united in their fight against ISIL.

Kurdish Peshmerga forces, who are helping on the ground, say they have killed 40 ISIL fighters not far from the northern city of Kirkuk.

The Kurdish soldiers claim to have prevented ISIL from attacking several of their positions and entering Kirkuk. Peshmerga forces are stationed north, east and west of Iraq’s second largest city Mosul, which is now under ISIL control.

The US Secretary of Defence Ash Carter has praised the efforts of the Peshmerga in the fight against ISIL.

“Well, we are doing more in Syria from the air. I think you saw some of that in recent days. And the opportunity to do that effectively is provided in the case of the last few days by the effective action on the ground of Kurdish forces, which gives us the opportunity to support them tactically,” he said.

Not at war with Islam

The US president said there were no current plans to send additional US troops overseas and repeated that the fight against the ISIL group would not be quick.

Obama said that the US would continue to crack down on the group’s illicit finance operations around the world.

He reiterated that with a strong partner on the ground in Iraq, the US and its partners would be successful in defeating the armed group.

The US president said that the training of such forces had been ramped up after a period that was too slow and that the fall of Ramadi, the capital of the predominately Sunni western Anbar province, had galvanised the Iraqi government.

“More Sunni volunteers are coming forward,” he said. “Some are already being trained and they can be a new force against ISIL. We continue to accelerate the delivery of critical equipment, including anti-tank weapons, to Iraqi security forces.”

Obama noted that the difficulty of preventing small-scale attacks by “lone wolves” within the US homeland despite success at preventing large attacks since the September 11, 2001 assaults on New York and Washington.

“We’re going to have to pick up our game to prevent these attacks,” he said.

But Obama stressed that the US is not at war with Islam. Instead, he said, “We’re fighting terrorists who distort Islam and whose victims are mostly Muslims.” 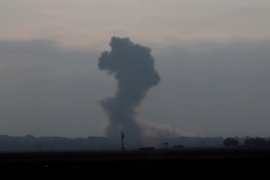