In the eastern province of Kars, PKK fighters detonated a bomb they had placed on rail tracks and later fired on rail workers sent to repair the line, Adem Unal, the region’s deputy governor, told the state-run Anadolu Agency. One of the workers was killed.

Violence has flared in Turkey in the past week, after the PKK claimed responsibility for the deaths of two Turkish policemen in the Kurdish majority city of Sanliurfa, near the Syrian border, and the government in response launched aerial strikes against PKK bases in northern Iraq.

The incidents have shattered the fragile peace process launched in 2012 with the Kurds.

Turkish Prime Minister Ahmet Davutoglu has said Turkey’s actions against the PKK will continue until its fighters lay down their arms.

Turkey’s main pro-Kurdish political party, the HDP, has called for the resumption of peace efforts – a plea the party’s co-chairman renewed on Thursday.

“The dialogue, slow as it was, must resume,” Selahattin Demirtas said in televised comments. “Fingers must be removed from the trigger.”

Kurdish activists and government critics say Turkey’s toughened stance against the PKK is a tactic aimed at strengthening the ruling party and attracting nationalist votes ahead of possible new elections in November.

Davutoglu’s Justice and Development Party lost its parliamentary majority in June and has until August 24 to form a coalition government, otherwise new elections will be called.

The PKK, considered a terrorist organisation by Turkey and its western allies, launched its armed campaign for autonomy in Turkey’s southeast in 1984. The conflict has killed tens of thousands of people since then.

The Kurds declared a ceasefire in 2013 as part of the peace efforts, but halted a planned withdrawal of fighters from Turkish territory, accusing the government of not keeping promises. 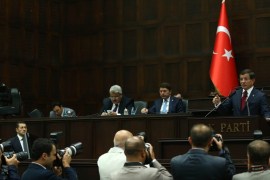