At least four Saudi soldiers have been killed and eight others wounded when shells fired from Yemen hit a region south of the kingdom, Al Jazeera sources and the government said.

The shelling took place in Dhahran Aljanoub, a governorate in the Saudi border region of Aseer, the state news agency said, citing the security spokesman at the interior ministry.

The statement did not say who carried out the shelling, but Yemen’s Houthi rebels and forces loyal to former Yemeni President Ali Abdullah Saleh have carried out similar attacks in the past.

News agency Saba, run by Houthis, said earlier on Friday that they had launched rockets on several Saudi border areas, including Aseer.

SPA said ground forces had responded to the shelling and had destroyed missile launchers.

Saudi forces and the Houthis have been trading fire across the border since the Arab alliance began its operations.

Meanwhile, in the southern Yemeni port city of Aden, fighters loyal to the government in exile took more territory from the Houthis, expanding their control around the city.

Reports said at least 14 Houthis were killed and 40 captured during the clashes.

The Southern Resistance retook much of Aden this month, supported by air strikes waged since late March by coalition forces including Saudi Arabia, who are trying to end Houthi control over much of the country, and return President Abd-Rabbu Mansour Hadi from exile.

The resistance, an alliance of southern groups including secessionists seeking an independent south Yemen and army units loyal to Hadi, won full control of Houta town, capital of Lahej province north of Aden, in heavy clashes, the sources said.

Ground fighting between armed rebels and government-allied forces also clashed in the city of Taiz rages on, killing at least 19 and wounding 28 from both sides, rebel and militia fighters and medical officials said.

In a separate incident, nine soldiers were killed and 30 wounded in a car bombing at an army base in southern Hadramout province, local officials said.

The officials, speaking on condition of anonymity because they are not allowed to brief reporters, said the Friday blast severely damaged several buildings at the government-controlled base. 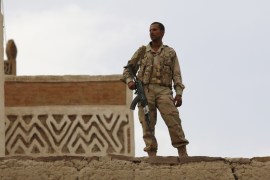 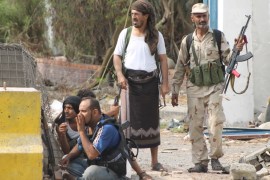