Myanmar has announced the release of almost 7,000 prisoners on presidential pardons, the latest in a series of amnesties by Thein Sein’s reformist government.

An information ministry statement on Thursday said 6,966 prisoners, including 210 foreigners, would be freed from various prisons across the country “on humanitarian grounds and in view of national reconciliation”.

Those pardoned include eight former senior military intelligence officers who since 2004 have been serving jail terms of 80 years or more, members of their families told the AP news agency.

Among the foreigners to be freed were 155 Chinese citizens jailed last week for illegal logging, official media sources said.

Others freed include former Brigadier General Than Tun, who served as a liaison officer between the former military government and Aung San Suu Kyi, the pro-democracy leader who was then under house arrest.

It was not clear if pro-democracy activists were among those being freed. The vast majority of those released in mass pardons are common criminals.

No official lists of pardoned prisoners are issued, so the names of those freed usually come from the prisoners themselves, or their families.

The Chinese loggers were arrested in January in a crackdown on Myanmar’s lucrative illegal logging and timber trade. More than 400 vehicles and 1,600 logs were seized during the raid, state media said at the time.

China lodged a diplomatic protest and expressed “extreme” concern about the verdict against its citizens, 153 of whom were given life sentences.

The pardons, effective from Thursday, are timed to coincide with a Buddhist religious holiday and come ahead of a November general election.

Myanmar’s incarceration of journalists, activists, politicians and even comedians was a key factor behind the West’s imposition of sanctions, many of which were eased when Thein Sein started releasing hundreds of political prisoners.

He had said there would be no more ‘prisoners of conscience’ by the end of 2013, a promise human rights groups say he has broken.

According to the Assistance Association for Political Prisoners, which monitors prisoners of conscience, as of last week, Myanmar had 136 political prisoners and another 448 facing trial.

Thein Sein came to power in 2011 after almost five decades of military rule. 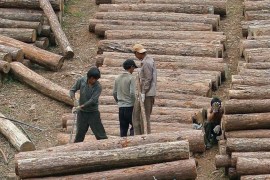 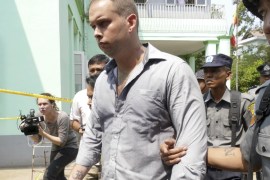 Editor and reporter given two-month jail term each in ruling that raises concerns about press freedoms in the country. 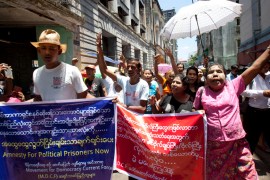 Despite reforms, lifting of sanctions and ‘opening’, political activists in Myanmar continue to face arrests.