The Iraqi government has denied allegations that it tortures prisoners, after Iraqi officials were questioned by a UN committee investigating suspected human rights abuses in the country’s jails.

Maan said that Iraq has a strong judicial system in place and that all prisoners receive due process.

Is there anyone in Iraq in prison, sentenced for torturing another human being?

Iraqi officials were challenged on Wednesday to name a single person the country had jailed for torture by the UN Committee against Torture investigating suspected human rights abuses in a justice system that it said had “gone astray”.

“Is there anyone in Iraq in prison, sentenced for torturing another human being? Is there one person? Five? Ten?” the chairman of committee, Claudio Grossman, asked the Iraqi delegation.

Another committee member, Alessio Bruni, said Iraq’s criminal law had no adequate definition of torture, so it could not adequately prosecute it.

Other questions included whether Iraq has secret detention facilities, whether anybody had been compensated for being tortured, and how to explain trials that lasted a few minutes and led to the death penalty.

Al Jazeera’s Imran Khan, reporting from Baghdad, said critics say keeping the legislation vague was a deliberate measure taken by previous governments to allow them to get away with acts such as forming secret prisons and torturing prisoners.

“There’s plenty of public evidence of these secret prisons,” our correspondent said, pointing to reports by HRW and Amnesty International.

“There are publicly available testimonies from people who’ve been inside these prisons who have alleged torture against the Iraqi government.”

The small Iraqi delegation, led by Deputy Minister of Human Rights Abdulkareem al-Janabi, will respond to the criticism in a second session on Thursday.

“We will be able to provide you with answers to most, if not all, questions raised by the committee,” Janabi said.

Iraq ratified the UN Convention against Torture in 2011, but rights groups such as Amnesty say torture is still widespread, with no noticeable change since Prime Minister Haider al-Abbadi took over from Nouri al-Maliki in late 2014. 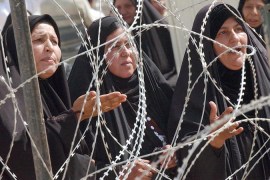 A report issued by Human Rights Watch documents torture, sexual assault and other forms of abuse against female inmates.