The Arab coalition has intensified air strikes on the Yemeni capital of Sanaa while fighting raged between pro-government fighters and Houthi rebels in the country’s south.

Al Jazeera has learned that more strikes on Friday targeted the aviation college building and the air defence headquarters, in addition to the house of the former president’s brother, Mohammad Abdullah Saleh, who was also the head of the presidential guards.

It was unclear if he was in his residence.

They also bombed Faj Attan Mountain overlooking Sanaa, home to a military base and a weapons depot that have been a frequent target of raids in the course of the three-month-old war.

At least 10 people were killed in a strike on another building in Bayt al-Faqih city in the southwestern province of al-Hodeida, Saba reported.

The coalition has been bombarding the Houthis and allied army units since March in a campaign to restore exiled President Abd-Rabbu Mansour Hadi to power.

Hadi fled in February to Saudi Arabia, where he remains, after the Houthis swept out of their northwestern stronghold and captured Sanaa last September, pushing Hadi’s government aside and then extending their control to large parts of Yemen.

Saba also reported mortar attacks by al-Qaeda and the Muslim Brotherhood-affiliated Islah party against homes in the Hasb district of the southwestern province of Taiz. The report could not immediately be confirmed.

On Thursday, the US state department called for a “humanitarian pause” in the conflict during the current Muslim holy month of Ramadan to allow international aid organisations to deliver urgently needed food, medicine, and fuel.

The United Nations on Wednesday had designated the war in Yemen as a Level 3 humanitarian crisis, its most severe category. 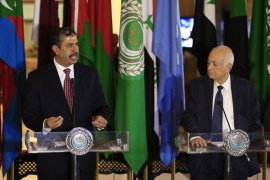 Scuffles break out at Houthi news conference in Geneva amid discord over size of delegation from Sanaa for peace talks.