APJ Kalam, a former Indian president, has died at a hospital after collapsing while delivering a lecture in northeastern India.

Kalam died on Monday night, according to B Warjri, chief secretary of Meghalaya state. He was 83.

Local media said he had been delivering a lecture at the Indian  Institute of Management in Shillong when he collapsed and suffered cardiac arrest. He was rushed to the  Bethany hospital where he passed on.

The president from 2002 until 2007, Kalam was known as the father of the country’s military missile programme.

Tributes immediately started to pour in for Kalam, with politicians and celebrities praising him.

Deeply saddened at the sudden demise of the former president of India Dr. APAJ Abdul Kalam. He was an inspiration to an entire generation.

Dr. Kalam, when you became the President, you gave the word 'hope' a new meaning for Indians… Today, we have… http://t.co/ld4rtRwqWA 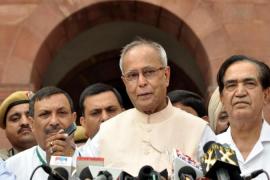 Should there be a President of India?

The latest presidential nomination casts doubt on the selection process used to fill the position.