Rajendra Pachauri, the former UN climate panel chief, has been dismissed as head of an Indian think-tank after a backlash over his return to work while facing allegations of sexual harassment.

The Energy and Resources Institute (TERI) announced on Thursday that Pachauri, 74, was being replaced as its director-general.

The news comes just days after he had won a court order allowing him to return to work while still on bail over claims he pestered a female colleague with inappropriate texts and emails.

While not specifying why Pachauri was being replaced, TERI said “the interests of TERI and its talented staff are paramount” as it named Ajay Mathur, a former World Bank official, as his successor.

The announcement was made in a statement that also praised Pachauri’s work in turning the Delhi-based TERI into “a major, financially autonomous, professionally dynamic organisation on the global stage”.

A court had given Pachauri permission last week to return to work at TERI, on condition that he steer clear of his 29-year-old alleged victim.

Although no formal charges have so far been brought against him, police have accused Pachauri of obstructing their investigation while the victim’s lawyer has alleged that he tried to influence witnesses.

Pachauri, a leading voice on the dangers of global warming, was forced to quit as chairman of the Nobel Prize-winning UN Intergovernmental Panel on Climate Change (IPCC) in February after his colleague filed her complaint.

He has denied the allegations and said his emails and mobile phone were hacked. 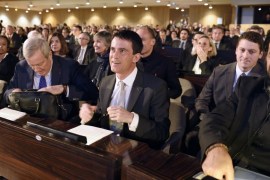