Hundreds of miners from a strike-paralysed city in Bolivia’s highlands have battled police in the capital La Paz, with authorities reporting 44 people arrested and one officer injured.

Protesting miners from the city of Potosi threw rocks through the windows of the Ministry of Government and then tossed small dynamite charges at police after officers used tear gas.

The government ministers were safely evacuated from the building, but two of their cars were vandalised by dynamite.

A fire that broke out in pine trees at the adjacent German Embassy was quickly extinguished.

The melee lasted about an hour and there were unconfirmed reports of injuries, though it was not clear how many people were hurt.

The government said a police officer was taken to a hospital after being hit in the head.

Hundreds of other protesters from Potosi also marched, showing support for a civic committee that is seeking to negotiate an end to a 16-day-old general strike in the city, which is a provincial capital.

Potosi depends heavily on mining and its residents have been hit hard by a slump in mineral prices.

The demonstrators are demanding the central government put more money into public works projects, calling for the construction of hospitals, roads and an international airport to be built in their region as part of a 26-point plan for the government.

The miners said they plan to continue to pressure the government and will hold the strike indefinitely. 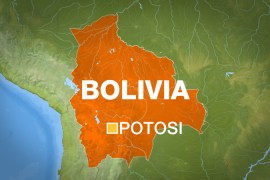 Construction workers in the Andes stumble across a mass grave containing the remains of an estimated 400 to 500 people. 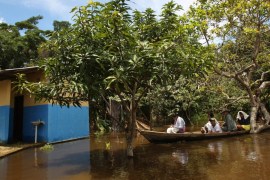 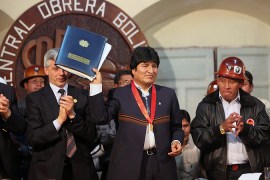 Bucking a global trend which pushes workers to work longer and older, Bolivians can now retire at age 58, down from 65.