Turkish authorities have identified a suspect over Monday’s suicide bombing close to the country’s border with Syria, Prime Minister Ahmet Davutoglu has said.

Davutoglu did not give the name of the suspect, but said there was a high probability the attack was caused by a suicide bomber with connections to the Islamic State of Syria and the Levant (ISIL).

Davutoglu said that the death toll had risen to 32 from 31, adding that 29 victims were still hospitalised.

On Tuesday, a video footage emerged of the moment a suicide bomber detonated an explosive device at a protest in Suruc a day on Monday.

The footage showed young men and women from the Federation of Socialist Youth Associations standing behind a banner declaring support for Kobane, some holding up small red flags. Suddenly there was a huge explosion, apparently from within the crowd, sending up a column of flame.

ISIL has claimed responsibility for the attack.

The students to build a library, plant a forest and build a playground in Kobane, a member of the group wounded in the blast, told the Reuters news agency.

Turkey’s Kurds have been enraged by what they see as the AKP party government’s failure to do more to stop ISIL. The PKK held Ankara responsible for Monday’s attack, saying it had “supported and cultivated” ISIL against the Kurds. 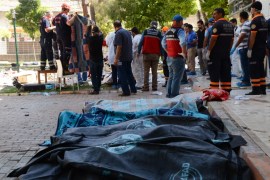