FARC rebels have begun a unilateral ceasefire in Colombia, the latest attempt to bring peace to the country after a half-century of hostilities.

The truce came into effect late on Monday, just hours after the Marxist fighters freed a captive soldier in an apparent goodwill gesture before they started observing the ceasefire.

Let us bring calm to our spirits, and let us lay down the weapons among us

Santos was speaking at an event marking the country’s independence.

Fitful peace talks have been taking place since 2012 in Havana, Cuba, but fighting has continued and even intensified this year.

Colombians have gradually grown disillusioned with the peace process, while Santos has urged citizens to find “points of agreement amid our differences”.

“Let us bring calm to our spirits, and let us lay down the weapons among us,” he was quoted by the AFP news agency as saying.

Santos said if the rebels do not live up to their truce, and there is no progress on the issue of what kind of punishment would be applied to the rebels under a peace accord, the process will fall apart for good.

The government has pledged to scale back military operations during the rebel truce and work toward a bilateral ceasefire, which would have to be overseen by the UN.

The most critical issue is that under a peace accord, the rebels must accept punishment that will “deny them freedom,” without this, there can be no deal, said Santos, promising the government would be very flexible.

One possibility is that only senior FARC commanders go to prison, and the rest of the group – totalling at least 7,000 fighters, the largest and longest-fighting armed group in Latin America – would be punished with detention on special rural estates or house arrest.

Santos said work will start this week on ways to protect rebels who lay down their arms. 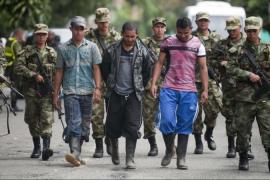 The dream of Colombian people about peace marked the presidential election, but will it come true?