Eleven Cambodian opposition members and activists have been sentenced to prison on insurrection charges, including three who received 20-year sentences, a defence lawyer has said.

The sentences, meted out on Tuesday for taking part in clashes in July 2014, over the closure of a key protest site in the capital Phnom Pehn, come as Cambodia’s Prime Minister Hun Sen stepped up efforts to quash dissent in a kingdom he has led for more than three decades.

Those jailed are from the opposition Cambodian National Rescue Party (CNRP) and were arrested during the clashes with authorities last year that left dozens wounded on both sides.

“This is a very serious sentencing. We lawyers cannot accept these convictions,” Sam Sokong, one of the group’s defence counsel told AFP, adding his eight other clients received seven years in jail.

Local rights group LICADHO described the proceedings as a “show trial with a predetermined ending, apparently set up only to intimidate” the opposition.

It said that the surprise sentencing was made without the presence of most of the defence lawyers.

Last week parliament passed a controversial law with the prime minister’s backing, to regulate non-governmental organisations, despite a boycott by opposition lawmakers and street protests.

Observers say the swiftness and severity of Tuesday’s sentences could be a kickback to the CNRP’s action and signals a deep freeze in relations between the two parties after ties improved late last year.

“There may be a connection with the fact that the opposition walked out of parliament last week when the NGO law went through,” Andrea Giorgetta from the International Federation of Human Rights (FIDH), told AFP news agency.

“There have been signs this would happen. It’s quite clear the ‘culture of dialogue’ is dead and buried.”

The controversial insurrection charges were made at the end of a protracted political standoff between the CPP and the CNRP after the 2013 election.

At the time opposition lawmakers were refusing to take their seats in parliament alleging that the election had been rigged.

A decision in July 2014 to close the capital’s main protest site at Freedom Park sparked violent demonstrations with injuries on both sides.

Rights groups described the charges as trumped-up and an attempt by the ruling party to prod the opposition into ending its boycott of parliament, which it did shortly after the charges were laid.

The CNRP took up its seats in the National Assembly after a year impasse in return for a promise of electoral reforms – but has since been frustrated by the Hun Sen’s manouvering.

Hun Sen has faced mounting criticism by rights groups over the suppression of street protests but maintains he will stay in power until he is 74. He is currently in his early 60s. 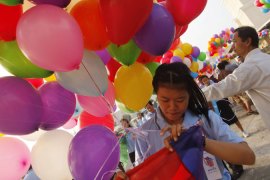 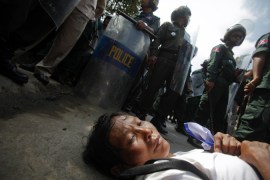 Lines are becoming blurred between who seeks to defend human rights and who pursues political change in Phnom Penh. 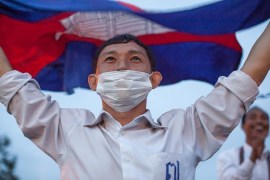 Five MPs-elect and an activist accused of “instigating violence” over demonstration that descended into clashes.