Algiers – Renewed clashes between Mozabite Berbers and Chaamba Arabs in Ghardaia province, 600km south of Algeria’s capital Algiers, have killed more than 20 people and wounded 300 others.

They are the bloodiest clashes since on-and-off fighting began two years ago. In response to the flare-up of violence earlier this month, Algeria’s ailing President Abdelaziz Bouteflika opted to send army troops to Ghardaia.

Located in the centre of the country, Ghardaia is now home to two ethnic communities that share a long history of rivalry over land ownership, property and housing. Berber Mozabites are Ibadis, following a form of Islam that is distinct from Sunni and Shia, while Chaamba Arabs, originally Bedouins, practise the Maliki approach to Islamic law. Tensions date back to the mid-1960s, following a decision by the Algerian government that encouraged the settlement of the Bedouin population in a Berber-majority territory.

In early June, a conflict over land ownership – related to a promotional housing programme run by a Mozabite contractor in Guerrera – fanned the flames of discord. Three weeks later, a Mozabite farm was torched, spurring the latest round of clashes.

Hamou Mosbah, a local official and member of the Mozabites’ coordination and monitoring committee, told Al Jazeera that there is a lack of political will to solve the ongoing conflict.

“We require having an independent team to investigate what really happened in our city,” he said.

The state has deployed more than 12,000 police and gendarmerie personnel in Ghardaia. Deploying troops to address the situation “clearly points [to] the inability of local authorities and security services to anticipate the resuming of the clashes, and their failure to manage them”, said Ahmed Kateb, a researcher at the University of Algiers who studies Euro-Maghreb relationships.

The doors are now wide open and hope for a sustainable solution exists, as the army will take over the management of the province and impose by force and by law a security and political solution to the crisis.

Ahmed Kateb, researcher at the University of Algiers

Kateb, however, remained optimistic about the chances for resolving the crisis: “The doors are now wide open and hope for a sustainable solution exists, as the army will take over the management of the province and impose by force and by law a security and political solution to the crisis,” he told Al Jazeera. “Sending the army … is an acceptable choice to conduct this operation to restore the peace.”

Last January, clashes in the region caused several deaths and the destruction of hundreds of houses. Government-backed peace efforts earlier this year failed to solve the conflict.

Kameleddine Fekhar, a Mozabite national council member and a leader for the autonomy of the Mozabite community, was recently arrested by police while praying in a mosque in the neighbourhood of Houache, along with dozens of others from both communities suspected of involvement in the latest clashes.

In February, Fekhar told Al Jazeera: “We can defend and take care of ourselves if the state withdraws,” adding that he had lost faith in government reconciliation efforts. “There can be no possible solution to solve our lasting conflict,” he said, blaming the Algerian state for “allowing this conflict to last” by bringing Arab settlers to the region decades ago. “This policy is aimed at not having a Mozabite majority in the city.”

Since Algeria gained independence in 1962, the army has been deployed only three times to restore calm after civilian uprisings. The first was in 1980, in the Berber-speaking region of Kabylie, after the eruption of what became known as the Berber Spring. The second was in 1988 as the government responded to a series of riots and demonstrations, the worst the country had experienced since its independence, by Algerian youth.

Unlike previous clashes in Ghardaia though, the latest one was marked by the use of firearms. Local security forces refused to intervene, saying they were not equipped to face such uprisings, according to Hamou Mosbah.

On July 12, the provincial governor banned all public demonstrations in five localities for a period of six months. This includes “public events regardless of their object, such as wedding parades, street shows, sit-ins as well as assemblies”, according to the governor’s statement.

Lachreg Abdelkader, a member of the Chaamba Arab community, told Al Jazeera that “for the moment, the situation is calm… In the place where I live, it’s secured and all fine, while in other neighbourhoods, such as Hai al-Wiam, Guerrara, Beriane, as well as Hai al-Hufra, tensions are still there”.

Since the violence resumed, there have not yet been any attempts at reconciliation between the two fighting communities.

“The current situation went too far and [has become too] serious to hope seeing any contact between the two communities,” Abdelkader said.

Solutions imposed from outside are unlikely to last long, Kateb said, noting any approach must include two fundamental aspects: civil and military. If political authorities put in place mechanisms to determine an appropriate solution, the military could ensure its implementation, he said.

In addition to the tribal dimensions of the conflict, there are also economic considerations, with the Chaamba Arabs feeling marginalised, Kateb added: “There is financial and economic prosperity for part of the population [Mozabite], but not for the other part [Chaamba].” 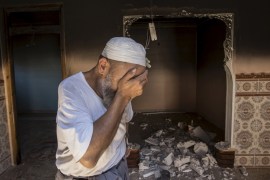 Security forces detain at least 27 people after fighting between Berbers and Arabs in Ghardaia killed 22. 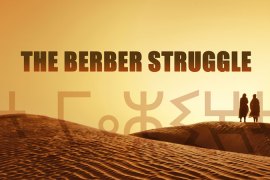 Language, history and identity are at the heart of the Amazigh political movement.