British energy company BP has announced it had agreed to settle US federal and state claims worth up to $18.7bn over the 2010 Gulf of Mexico oil spill.

Thursday’s agreement increases the pre-tax cost of the disaster to BP by an estimated $10bn to $53.8bn, Carl-Henric Svanberg, the chairman of BP, said. The company is expected to release a final figure in its second quarter results in late July.

“For BP, this agreement will resolve the largest liabilities remaining from the tragic accident and enable BP to focus on safely delivering the energy the world needs,” said Bob Dudley, BP group chief, in a statement.

Attorney General Loretta Lynch, the head of the US Justice Department, hailed what she said was a record deal.

“If approved by the court, this settlement would be the largest settlement with a single entity in American history; it would help repair the damage done to the Gulf economy, fisheries, wetlands and wildlife; and it would bring lasting benefits to the Gulf region for generations to come,” she said in a statement.

The deal has been struck with the US federal government and five Gulf Coast states – Alabama, Florida, Louisiana, Mississippi and Texas – affected by the explosion on the Deepwater Horizon drilling rig.

Eleven people died and millions of barrels of oil were spilled into the Gulf, decimating wildlife and devastating the ecology of a region dependent on the seafood and tourism industries.

The settlement, to be paid out by BP’s US upstream subsidiary, BP Exploration and Production Inc, includes $5.5bn to the US as a civil penalty under the Clean Water Act.

A further $7.1bn will be paid to the US and Gulf Coast states over 15 years for natural resource damages, in addition to $1bn already committed.

Another $4.9bn will be paid over 18 years to settle economic and other claims made by the five Gulf Coast states.

And up to $1bn will be paid to resolve claims made by more than 400 local government entities. 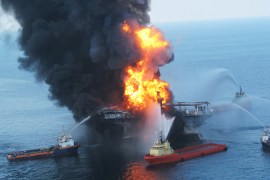 Court rules BP must abide by multi-billion dollar settlement with locals despite its protests that many were not harmed.