The cars belonged to officials of Islamic Jihad, Hamas and its armed wing, the Qassam Brigades.

Al Jazeera’s Tamer Almisshal, reporting from Gaza, said that both of those wounded were civilians living in a house near one of the blast sites.

Arrests were reportedly made over the incident later on Sunday.

Iyad al-Buzom, spokesman for Hamas’ interior ministry, released a brief statement in which he accused “vandals” seeking to destabilise Gaza of carrying out the explosions.

He said security officials started an investigation and would pursue the criminals.

There was no immediate claim of responsibility for the attacks but an Al Jazeera correspondent in Gaza noted that Sheikh Radwan witnessed fighting between Hamas security forces and fighters loyal to the Islamic State of Iraq and the Levant (ISIL) group in early June.

ISIL threatened Hamas in a video shared online earlier this month, pledging to end the faction’s rule in the territory.

Graffiti appearing to show an emblem used by ISIL could be seen behind one of the vehicles targeted in the attacks.

Osama Hamdan, a senior Hamas leader, told Al Jazeera that whoever was behind the attack was working for Israeli interests but Hamas would not take any hasty actions.

“We have to complete investigations to find who exactly did this and according to the law they [the perpetrators] will be questioned and judged,” he said.

“They don’t have any real support in Gaza. ISIL is very strange and people will not accept that.” 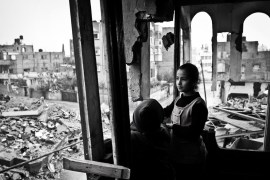 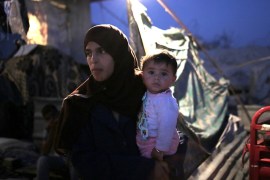 The deep scars of Gaza’s war

One year after Israel’s assault, thousands still live in temporary shelters while children suffer from trauma.