The director of a high-profile law firm in Beijing has pleaded guilty to disorder charges, marking a 10-day government crackdown on human rights lawyers and activists.

Since July 9, more than 200 lawyers and activists have been targeted in what Amnesty International called an “unprecedented” spree of detentions and police questioning.

Director Zhou Shifeng of Fengrui Law Firm faced charges alongside nine lawyers and four staff members at his firm, which has taken on politically sensitive cases for clients like Uighur dissident Ilham Thoti.

Deemed a “criminal gang” by state-run newspaper The People’s Daily, the group faced a range of charges, including inciting disorder and disrupting trial proceedings.

The People’s Daily also accused the group of organising protests to stoke support for their cases, reporting that suspects have since admitted to exaggerating and politicising their cases.

Throughout the country, a wide sweep of around 200 lawyers, activists and bloggers have been detained or questioned by police since July 9. As of Friday, Amnesty International said that 24 people were still feared to be missing or in police custody.

“What we saw with [Zhou] pleading guilty is that the authorities are placing emphasis on obtaining confessions that prove their narrative of an organised conspiracy to incite disorder,” William Nee, China Researcher at Amnesty International, told Al Jazeera.

Nee expressed concern over the lack of “typical safeguards”, such as access to legal representatives and family members, that has characterised the crackdown.

Some detainees have been placed under residential surveillance, where they are kept in undisclosed locations with no means of communication with family.

This lack of transparency, coupled with the government’s emphasis on confessions, raises fears over the “possibility of torture or other ill-treatment”, according to Nee.

The People’s Daily reported that the crackdown began when the Ministry of Public Security looked into the actions of two activists, later broadening their investigation to a “major criminal syndicate…composed of ‘rights defense’ lawyers.”

“Time after time lawyers would appear and take the lead in stirring up trouble with multitudes of ‘petitioners’ holding up signs and making a ruckus,” The People’s Daily reported, according to a translation by The New York Times.

Since the crackdown, a group of prominent lawyers in Hong Kong has launched a global petition to denounce what it calls the “intimidating harassment” of authorities against lawyers.

The petition demanded that China “respect the constitutional rights” of the detained lawyers; it called for transparent and fair judicial processes for those detained, as well as an end to raids on lawyer offices.

“Only when lawyers’ professional duty and rights are respected can the rule of law as understood in the civilised world take root in Mainland China,” said the petition, which has since been signed by almost 1,000 people. 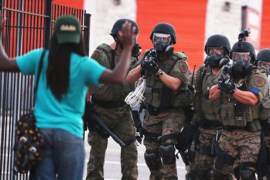 Racial discrimination and police abuses cited in China’s annual response to the US’ report on Beijing’s rights record.