Hundreds of people including children have been injured after two trains collided during peak hour in the South African city of Johannesburg, police have said.

Nana Radebe, spokeswoman for Johannesburg Emergency Services, said 326 people were rushed to nearby hospitals with minor to serious injuries on Friday. No fatalities were reported.

The trains were on the same track, Radebe told the AP news agency, and it appeared that a travelling train collided with a stationary train.

“The one train had stopped because of a signal when another came from behind us hooting and smashed into its back,” one commuter told the African News Agency.

The accident happened at peak hour between two stations, with both trains travelling from the Johannesburg city centre to the township of Soweto.

Authorities were investigating the cause of the accident.

Last month, seven people were injured when a train derailed in Johannesburg.

In April, two passenger trains collided south of Johannesburg, killing the conductor of one of the trains and injuring 241 people. 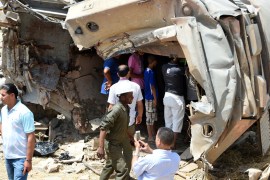 Deaths in train crash in Tunisia

More than a dozen killed and at least 70 injured when a train and a lorry collided in central Tunisia, authorities say. Train that derailed in Philadelphia, killing seven people, was travelling into a curved stretch of track at 160kph.