British Foreign Secretary Philip Hammond has called for a UN-backed international tribunal to prosecute those responsible for the downing of Malaysian Airlines flight MH17 over Ukraine a year ago, as memorial services were held to mark the anniversary of the incident.

“Justice must be delivered for the 298 innocent people who lost their lives,” said Hammond, whose country is one of the permanent members of the UN Security Council.

“That requires an international tribunal, backed by a resolution binding all UN member states, to prosecute those responsible.

“Any attempt to undermine this process would deprive the victims of justice and cannot be tolerated.”

Ukraine has blamed Russian-backed separatist rebels for shooting down the jet, while Moscow blames Ukraine.

The Netherlands, whose citizens made up the majority of those killed in the July 17, 2014 disaster, is working with Malaysia, Australia, Belgium and Ukraine on setting up an international court to bring prosecutions.

A draft UN resolution, obtained by the AFP news agency, calls for establishing the tribunal under Chapter Seven of the UN charter, which means the court’s efforts to prosecute those responsible could be enforced by sanctions.

On Friday, tearful relatives of several Australians who were flying on the Malaysian plane gathered for a memorial service that included the unveiling of a plaque set in soil from the place where they died.

INTERACTIVE: A timeline of major air disasters over the past 15 years

There were 38 Australian citizens and permanent residents among those on MH17, which was heading from Amsterdam to Kuala Lumpur when it was shot down. Everyone on board was killed.

Australian Prime Minister Tony Abbott unveiled a permanent memorial to the Australian victims at the service in the nation’s capital, Canberra.

The memorial, which features a plaque inscribed with the names of Australians who were killed, is set in soil that a police officer brought back from Ukraine.

“He knew that the place where MH17 came to rest was sacred and that a piece of it should come back to Australia,” Abbott said. “It was a humane and decent thing for him to know and do. It was a contrast to the savagery that brought down the plane.” 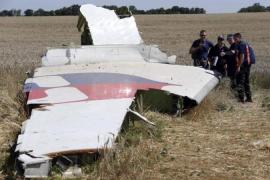 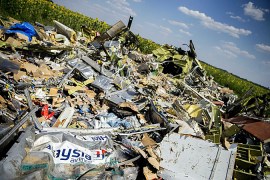 BND is first European intelligence agency to openly accuse separatists of shooting down the plane. 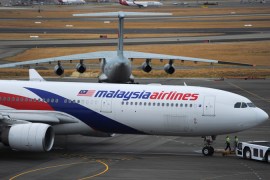 Malaysia Airlines: can it survive?

The carrier announces financial losses and job cuts as it strives to recover from two passenger jet disasters. 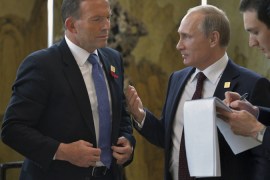 Russian leader and PM of Australia, which lost 38 passengers in the crash, agree to have speedy and “unbiased” probe.