Several ministers and top intelligence officials of the exiled Yemeni government have arrived in Aden for the first time since the Houthi rebels captured the southern port city.

The officials arrived by helicopter from neighbouring Saudi Arabia – the seat of the government in exile – on Thursday, a day after their loyal forces recaptured Aden from the Houthis.

“[Exiled President] Abd-Rabbu Mansour Hadi delegated this group to return to Aden to work to prepare the security situation and ensure stability ahead of a revival of the institutions of state in Aden,” one of the officials told the Reuters news agency.

On Wednesday, Popular Resistance fighters – a southern militia that has been the mainstay of support for Hadi – recaptured the provincial government headquarters in the Mualla district opposite Aden’s main commercial port, Ali al-Ahmadi, a militia spokesman, told the AFP news agency.

They also advanced in Aden’s Crater district, where a presidential palace is located, he said.

Pro-government fighters entered the small commercial port in Mualla itself, near the main port which the rebels had failed to take, according to military sources.

The road links Aden to the rebel-held city of Mocha, home to a port near Bab el-Mandeb.

“The Resistance is at the gates of the city of Mocha,” through which rebel military reinforcements used to arrive from northern cities under their control, Hasan said.

A day earlier, the Popular Resistance, backed by reinforcements freshly trained and equipped in Saudi Arabia, retook the airport and much of the surrounding Khormaksar diplomatic district.

There was no information available on rebel losses.

The offensive came after the failure of a UN-declared truce that was to have taken effect just before midnight on Friday to allow the delivery of desperately-needed relief supplies.

The United Nations has declared Yemen a level-3 humanitarian emergency, the highest on its scale.

More than 21 million people – about 80 percent of Yemen’s population – need aid, with 13 million facing food shortages, while access to water has become difficult for 9.4 million people.

According to UN figures, more than 3,200 people have been killed since late March, when a coalition of Arab countries led by Saudi Arabia began air strikes after Houthis took over the reins of power in the impoverished country. 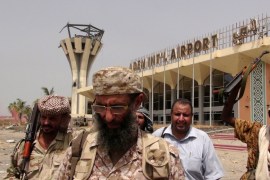 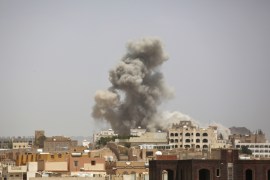