Winter has arrived with a vengeance across eastern Australia, prompting severe weather warnings for parts of Victoria and New South Wales (NSW).

The cold snap has even delivered a dusting of snow into the far south of Queensland.

The icy weather has blasted across the southeast of the country bringing some of its coldest weather in decades as overnight temperatures dipped below freezing in many areas. The bitter conditions are expected to last for much of this week.

Some major roads, including parts of the Great Western Highway, were closed as snow fell widely across Victoria and NSW.

Blizzard conditions developed with winds approaching 100km/h at times resulting in damage to roofs and uprooting of trees in the central tablelands.

The snow also raises concerns for livestock farmers who will have to start hand-feeding their stock.

Some have also had to move their animals under cover to protect them from the snow and icy winds. Naturally, the snow was rather more welcome over the Alpine regions and the ski resorts.

Similarly, the snow brought a welcome chill for local fruit producers. Peter Darley of the NSW Farmers Association said that it was the best fall of snow he had seen in the region for 20 years.

There were decent falls along the Great Dividing Range from the Snowy Mountains in the south to Tenterfield on the NSW-Queensland border. Up to 17cm of snow fell over the higher ground around Orange at the foothills of Mount Canobolas with flurries settling as low as 700m.

The threat of further snow is expected to ease over the next few days as temperatures recover slightly. 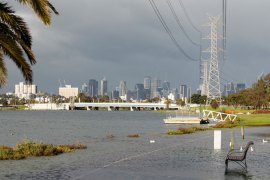 Storms hit the states of Victoria and New South Wales with damaging winds, and heavy rain and snow. 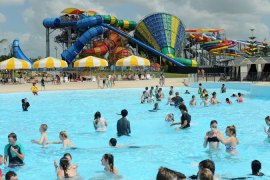