The Boy Scouts of America executive committee has voted to allow gay adults to serve as leaders.

In a statement published on its website on Monday, the organisation said the changes reflected “the rapid changes in society and increasing legal challenges at the federal, state, and local levels”.

“This change allows Scouting’s members and parents to select local units, chartered to organisations with similar beliefs, that best meet the needs of their families.

“This change would also respect the right of religious chartered organisations to continue to choose adult leaders whose beliefs are consistent with their own.”

The resolution was unanimously adopted by the executive committee on Friday and the national executive board will meet on Monday July 27 to ratify the decision.

In 2013, the Boy Scouts voted to allow openly gay teens to join the organisation, but – at the time -maintained the ban on gay leaders.

The 105-year-old institution, famed for its outdoor training programmes and support of wholesome virtues, has close links to the country’s conservative and religious heartland.

The group, which is separate from the Girl Scouts of the USA, counts more than two million boys in its membership.

The US Supreme Court previously ruled in 2000 in favour of a gay ban in the Boy Scouts, saying that the prohibition against openly homosexual members was part of its right as a private organisation to free association. 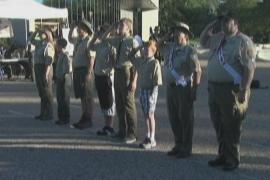 The Boy Scouts of America says it needs more time to review whether or not to end a controversial ban on gay members. 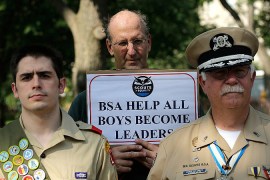 US Boy Scouts vote to end ban on gays