Fighters of the Islamic State of Iraq and the Levant (ISIL) have re-entered Syria’s Tal Abyad, seizing a district from the Syrian Kurdish forces who pushed them out of the border town two weeks earlier, a monitoring group and a Kurdish spokesman have said.

Rami Abdelrahman, the director of the UK-based Syrian Observatory for Human Rights, said on Tuesday that the fighting was continuing in the town, which lies on the border with Turkey.

“A cell of [ISIL] fighters infiltrated Tal Abyad and took control of a district in the eastern outskirts of the town,” he said. “Kurdish fighters are trying to encircle the jihadists and prevent them from advancing further.”

Redur Khalil, a spokesman for the Kurdish Protection Units (YPG), confirmed that several dozen ISIL fighters had infiltrated an area under Kurdish control and that fighting was ongoing.

“Daesh uses this method of infiltration to enter areas it was previously expelled from,” Khalil told the AFP news agency, using an Arabic acronym for ISIL.

Tal Abyad was a crucial ISIL supply hub and stronghold for around a year before Kurdish forces expelled the group.

The YPG, backed by Syrian rebel allies, seized Tal Abyad on June 16, just days after beginning an advance against the town.

They were backed by air strikes from the US-led coalition fighting ISIL.

The battle for Tal Abyad prompted tens of thousands of refugees to flee across the border into Turkey, with the influx at times causing chaos.

But after YPG and rebel forces secured the town, many residents began to return from Turkey.

Kurdish forces have battled ISIL in several areas in the northern Syrian region along the border with Turkey.

In January, they secured the Kurdish border town of Kobane, which ISIL forces had been trying to capture for about four months.

Afterwards, the Kurds and their Arab allies began taking over areas in ISIL stronghold province of Raqqa.

But shortly after taking Tal Abyad from ISIL, the Kurds came under attack again in Kobane.

A group of ISIL fighters infiltrated the town after carrying out several car bomb attacks, and killed more than 200 people inside over the course of two days before finally being pushed back out, the Syrian Observatory said. 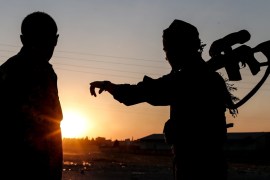 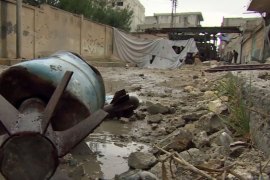 The tough battle to rebuild Kobane