Rocket fire from Yemen’s Shia Houthi rebels on a residential district of the country’s southern port city of Aden has killed at least 17 civilians and wounded dozens, according to medical sources.

The Houthis and their allies early on Wednesday pounded the city’s loyalist-held Mansoura district with 15 artillery rockets from their positions in the Dar Saad neighbourhood, loyalist forces spokesman Ali al-Ahmadi told the AFP news agency.

The attack came after a car bombing targeting Houthi leaders in the capital Sanaa, claimed by the Islamic State of Iraq and the Levant (ISIL), killed at least 28 people late on Monday.

The car bomb targeted two brothers, both rebel chiefs, during a gathering to mourn the death of a relative, a security source said.

Eight women were among the dead.

ISIL said in an online statement that it had organised the attack on a “Shia nest”.

Meanwhile, as the fighting continued, officials said about 1,200 prisoners, including al-Qaeda suspects, escaped during clashes in a jail in central Yemen on Tuesday.

“Heavy fighting took place near the central prison and the popular committees [militiamen] approached and seized control of the area, but Saleh’s forces opened the prison doors,” the official said.

“More than 1,200 of the dangerous prisoners escaped.”

Another local official told the Reuters news agency that some of the escapees were “suspected of belonging to al-Qaeda” but said they left amid heavy clashes between warring militias in the city.

Hakim al-Masmari, editor of the Yemen Post, told Al Jazeera from Sanaa that the incident was the third major jailbreak in Yemen since March.

Another group of al-Qaeda suspects escaped from a prison in the eastern city of Mukalla in April after army forces suddenly quit the city.

Yemen’s Houthi fighters and forces loyal to former President Ali Abdullah Saleh are battling the supporters of exiled President Abd-Rabbu Mansour Hadi, who is supported by a coalition of Arab states.

Houthi fighters entered Taiz in March, in a southward push from their base in Sanaa that eventually drew foreign military intervention.

Al-Qaeda and Houthis are also fighting each other in several areas in central Yemen. 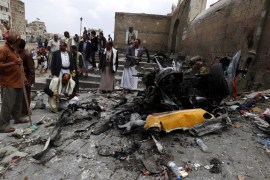 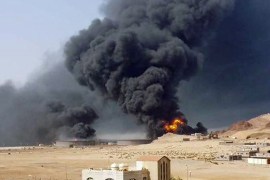 At least 21 reportedly killed in Houthi attack on oil refinery in Aden and street battles with Hadi loyalists in Taiz.