The New Development Bank, also known as the BRICS Bank, is one of two international development banks that China is promoting as an alternative to Western institutions such as the World Bank.

The Standing Committee of the National People’s Congress, China’s legislature, on Wednesday approved the agreement between Brazil, Russia, India, China, and South Africa to create the bank, Xinhua said.

China has pledged to contribute a total of $41bn to the bank, giving it the largest voting right at 39.5 percent.

The bank will have initial authorised capital of $100bn, and its initial subscribed capital of $50bn will be equally shared among the founding members, Xinhua said.

Last month, state media said that China would inject $10bn into the bank once the Chinese parliament had ratified the agreement.

Russia and India ratified the agreement in April.

The bank, which will be headquartered in Shanghai, will first be led by an Indian, followed by a Brazilian and then a Russian.

China has also led the creation of a new Asian development bank, known as the Asian Infrastructure Investment Bank, which counts among its 57 member countries nations such as Britain and Germany. 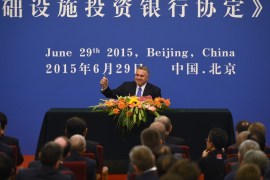 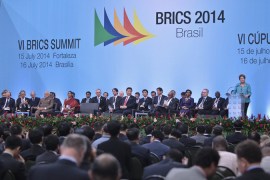 Can BRICS counter the West? 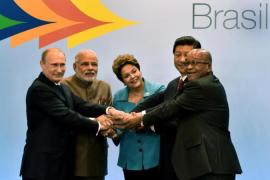 The BRICS’ initiatives for a democratic global order should be welcomed, but the group is still dominated by China.