Libya’s internationally recognised parliament, based in the port city of Tobruk, has suspended its participation in United Nations-brokered talks over a proposed power-sharing scheme with a rival government, which controls the country’s capital, Tripoli.

A spokesman for the internationally recognised parliament’s negotiators, Essa Abdel-Kauoum, told the AP news agency that the council made its decision after UN envoy Bernardino Leon “succumbed” to its rival’s demands and presented a draft proposal that gives them more power.

“Leon brought us to square one … to appease an ideological group in a horrible way,” he said. “He succumbed to extortion.”

Abdel-Kauoum added that his delegation would not be attending another planned meeting in Berlin.

RELATED: ‘No one can win this war’

Libya is split between a government backed by militias that seized the capital last August and the elected parliament, which is forced to convene in Libya’s far east.

The UN draft stipulates the formation of a national unity government and would create a new legislative dominated by the Tripoli-based leadership and executive powers alongside the elected parliament.

Mohammed Sawan, the leader of the political arm of Libya’s Muslim Brotherhood, issued a statement “welcoming” the new draft.

“We think this has achieved a tangible positive improvement which should be taken seriously and built upon to reach an agreement that ends the political division and achieves stability,” said Sawan, who heads the Justice and Construction Party.

“All I can tell you for now is that the reaction is positive,” Leon told journalists.

Libya has slid into chaos since the 2011 overthrow and killing of longtime leader Muammar Gaddafi. A patchwork of former rebel brigades other militias control much of the oil-rich North African country.

The unrest has allowed fighters affiliated with the Islamic State of Iraq and the Levant (ISIL) group to take over the central city of Sirte and march towards key oil terminals.

On Tuesday, the armed group seized a compound near Sirte that had been used as the headquarters of militias sent by the Tripoli-based government to battle the fighters.

The ISIL affiliate trumpeted its latest advance with online pictures and a statement. The compound is on the road to the coastal city of Misrata, home of the most powerful militia backing the Tripoli authorities. 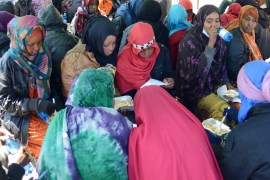 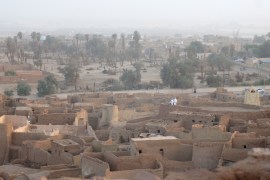