World leaders have wrapped up a G7 summit in Germany, addressing major issues including the crisis in Ukraine, climate change, the Greek economy and global security threats.

In a joint communique issued on Monday, following a two-day summit in the Bavarian Alps, the leaders of the most powerful countries warned Russia it would face stepped-up sanctions for its “aggression” in Ukraine.

“We … stand ready to take further restrictive measures in order to increase cost on Russia should its actions so require,” said the communique. “We recall that the duration of sanctions should be clearly linked to Russia’s complete implementation of the Minsk agreements and respect for Ukraine’s sovereignty.”

For the third time, Russia’s President Vladimir Putin was barred from a G7 summit due to what US President Barack Obama termed his “aggression in Ukraine”, as the Group of Seven top powers closed ranks against Russia.

The leaders also sought to address other threats to global security.

In an unusual move, the G7 leaders invited the heads of countries threatened by armed groups, including the leaders of Nigeria and Iraq.

Iraq’s Prime Minister Haider al-Abbadi was invited to discuss the US-led campaign to help his country fight the Islamic State of Iraq and the Levant (ISIL) group which launched a lightning offensive a year ago and have snatched over a third of the country’s territory.

“We reaffirm our commitment to defeating this terrorist group and combatting the spread of its hateful ideology,” said the leaders, in reference to ISIL.

OPINION: A winning strategy for the anti-ISIL coalition

Meanwhile, ahead of United Nations climate summit in Paris, the leaders stressed that “deep cuts in global greenhouse gas emissions” were required with “a decarbonisation of the global economy over the course of this century”.

The aim was to send a clear signal to push other nations taking part in the Paris meeting to commit to reducing dangerous greenhouse gas emissions, which threaten to melt ice caps and glaciers, raise sea levels and bring more violent storms and floods.

Another pressing problem was the haggling between debt-hit Greece and its international creditors – the EU, ECB and IMF – and the fear that a messy default could lead to Greece exiting the eurozone, with unknown repercussions for the world economy.

Merkel warned “we don’t have much more time” to resolve the debt crisis, with Athens and its creditors – the IMF, the European Union and European Central Bank – having been locked in negotiations for five months on reforms needed to unlock 7.2 billion euros ($8bn) in rescue funds that Athens desperately needs.

And Obama stressed that Greeks would have to make “tough” choices in terms of reforms but said they would be positive in the long term. 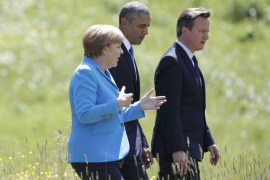 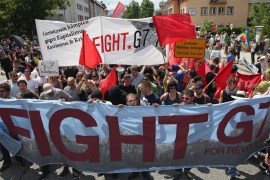 Protesters converge on Alpine town where leaders of industrial nations will discuss security, energy and the economy.