The daughter of a high-profile Colombian security official has been released by her abductors, President Juan Manuel Santos has said.

“We welcome the news that Daniela Mora has been released and is with her parents. Congratulations to Colombian Police for going after her captors,” Santos wrote on Twitter.

Her father, Diego Mora, is director of Colombia’s National Protection Unit (UNP), which is in charge of protecting high-profile public figures, including ministers and members of congress.

Mora, 11, was abducted on Thursday by unknown assailants as she left school in Cucuta, a city on the Venezuelan border.

Police found her on Saturday on the road from Zulia to El Cornejo in Norte de Santander province, 400km northeast of the capital, Bogota, said Donamaris Ramirez, mayor of Cucuta.

Authorities had announced a reward of 250 million pesos ($96,000) for information leading to Mora’s whereabouts after protests were held calling for her release.

Cucuta, a northern city of 650,000 people, suffers from rampant crime, drug trafficking and smuggling, and the area is a bastion for the country’s two largest rebel groups, the Revolutionary Armed Forces of Colombia (FARC) and National Liberation Army (ELN).

The UNP, created in 2011, spends $600,000 a day guarding politicians, journalists, activists and others deemed to be at risk.

It is charged with protecting some 7,500 people deemed to be threatened by Colombia’s five-decade civil war, a conflict rife with kidnappings and assassinations that has at various times drawn in leftist guerrillas, right-wing paramilitaries and drug gangs. 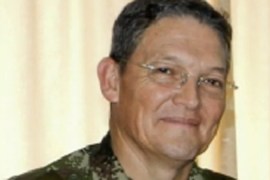 Rebel group blames incident on government for its insistence on continuing to negotiate peace deal without ceasefire.