Fighters from the Islamic State of Iraq and the Levant (ISIL) group have been partly driven out of Syria’s northeastern city of Hasakah, the Syrian army has said.

Sunday’s development came days after ISIL, approaching from their stronghold of Shaded city, made lightening advances after conducting about a dozen suicide attacks at army checkpoints in the city.

Syrian state television, quoting an army source, said in a newsflash on Sunday that the military had taken back an electricity station, a juvenile prison and two villages almost two kilometres south of the city that had been occupied by ISIL.

The army announced later that the Syrian air force had also bombed ISIL posts in a string of villages south of Hasakah, including Tel Beiji, Beiji, Makhroum, Tel Baroud and Um Madfaa, which it said had killed “tens of terrorists and destroyed their vehicles”.

Inside Story: ISIL’s tactics in Iraq

Meanwhile, in Iraq, government forces advanced against ISIL in Baiji on Sunday as they battled to retake the strategic town for the second time, officers said.

“Our security forces arrived to the centre of the town of Baiji about 10:30am local time and raised the Iraqi flag,” an army major general told the AFP news agency.

The officer said that Iraqi forces were shelling “terrorists hideouts” in the town with mortar rounds.

A police colonel confirmed that Iraqi forces were making progress, saying they were in control of the city centre and were “advancing towards the northern neighbourhoods of the town”.

Security forces are also fighting to push ISIL out of the nearby Baiji refinery, a vast complex, which once produced 300,000 barrels per day of refined products meeting half of the country’s needs.

ISIL spearheaded a sweeping offensive last June that overran Iraq’s second city Mosul in less than 24 hours and then seized much of the country’s Sunni Arab heartland.

ISIL has been driven out of some areas north of Baghdad, but still holds much of western Iraq. 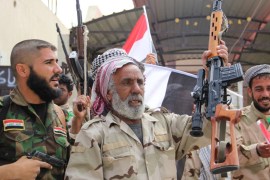 A winning strategy for the anti-ISIL coalition

Empowerment of Sunni communities is the key to success in Iraq. 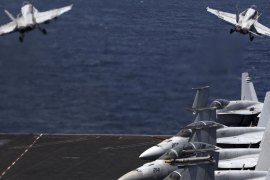 Has the strategy against ISIL failed?

A meeting in Paris is held to debate how best to cope with the radical group’s successes.