The UN refugee agency says it has now registered almost four million Syrian refugees spread across the region, with the highest number located in Turkey.

More than half of all Syrian refugees are under the age of 18.

Activists say the number of refugees fleeing into neighbouring countries has increased as the fighting in Syria intensified over the past few months, particularly after the Islamic State of Iraq and the Levant (ISIL) group captured Syria’s historic Palmyra city last month and advanced on the northeastern province of Hasakah.

The UN predicts that by the end of 2015, up to 4.27 millions refugees could be registered – making it the largest exodus of a country’s citizens since the Rwandan genocide 20 years ago.

Melissa Fleming, UNHCR spokesperson, told Al Jazeera that it has been very difficult to cope with such high numbers of refugees, because of a lack of funding.

“In 2014, we received only 54 percent of the funding requested for refugees, which means we covered just over half of the needs,” she said.

“Meanwhile, refugees and displaced Syrians have exhausted their savings and increasing numbers are resorting to begging, child labour, even prostitution to make ends meet.

“More than 2.3 million children inside Syria are not in school. Among refugees, the numbers are even worse: with nearly half of children not receiving an education.”

Against this backdrop, an activist in Hasakah told Al Jazeera that at least 3,000 people have fled into Turkey since Wednesday, fearing ISIL’s rapid advance to the southern entrance of the city.

Meanwhile, in Aleppo province – on Syria’s border with Turkey – ISIL has expanded its control at the expense of rival groups, the UK-based Syrian Observatory for Human Rights said.

According to the monitor, ISIL now controls half of Syria’s land.

In the north, a Syrian coalition known as the Fattah Army has captured Idlib province after Syrian government forces retreated at the end of May.

The Fattah Army is made up of several armed groups, including the Nusra Front, al-Qaeda’s Syrian affiliate.

The Fattah Army seized Idlib city on March 28,  which was home to 40,000 people before the conflict began and the last remaining government-held city in the eponymous province, which borders Turkey.

On Saturday, the Fattah Army announced its full control of Mihambel town, located in Idlib countryside on the Arihah-Latakia road.

In Damascus, ISIL seized large parts of the devastated Yarmouk camp on the southern suburbs of the capital last month, and have been battling other armed groups inside.

More than 220,000 people have been killed in Syria since anti-government protests broke out in March 2011.

During April and May alone, the Syrian Observatory documented at least 6,600 deaths, including 272 children. 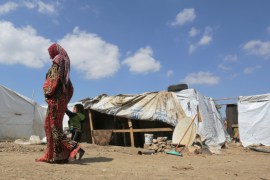 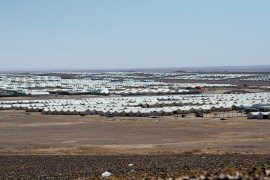 Scalding temperatures, a lack of electricity and soaring food prices have created harsh conditions in the desert camp.