Manila and Tokyo have agreed to start talks on allowing Japanese military aircraft and naval vessels to use bases in the Philippines for refuelling and picking up supplies, Philippine President Benigno Aquino has said.

The move would allow Japan to extend its patrol range deep into the disputed South China Sea.

“We will be starting discussion on this,” Aquino said at a news conference in Tokyo on Friday during a state visit to Japan.

Japan is considering joint air patrols with the US in the South China Sea, sources told the Reuters news agency in April, in response to China’s increasingly assertive push for influence as it builds air strips and other man-made islands in the disputed waters.

A Visiting Forces Agreement (VFA), would clear the way for the Japanese military to use Philippines’ bases on a rotational basis, similar to the way the US does now.

An ability to refuel close to the South China Sea would allow Japan’s airforce to keep their aircraft on patrol longer and cover a greater distance.

The decision to start talks on a VFA was not included in a joint statement on Thursday after Aquino met Japanese Prime Minister Shinzo Abe.

The two leaders, however, discussed the VFA and agreed to open up negotiations, a source with knowledge of the meeting told Reuters. He declined to be identified because he was not authorised to talk to the media.

Unable to match the scale of the Chinese fleet, Manila is looking for allies in its territorial spat with China.

Aquino on Wednesday sparked ire in Beijing by comparing it with Nazi Germany in the run-up to World War II.

“If somebody said ‘stop’ to [Adolf] Hitler at that point in time, or to Germany at that time, would we have avoided World War II?” he said in a speech to business leaders.

Tokyo is concerned that Chinese land reclamation projects in the South China Sea will expand Beijing’s influence in a region through which about $5 trillion of sea-borne trade passes annually, much of it heading to and from Japan. 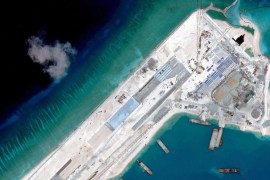 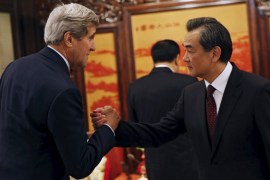