A huge explosion at a petrol station in Ghana’s capital Accra has killed at least 90 people and set alight neighbouring buildings after floods swept stored fuel into a nearby fire, according to authorities.

The blast happened on Thursday as dozens of people sought shelter at the petrol station and in nearby shops in central Accra to escape the torrential rains.

The disaster raised anew concerns over the city’s inadequate infrastructure.

Al Jazeera’s Ama Boateng, reporting from Accra, said the city and the rest of Ghana have been experiencing torrential rains.

“This is a very busy area of Accra. Lots of people. Lots of car traffic. And because of the heavy rains people gathered at this gas station to seek shelter and this explosion happened,” she said.

TV footage showed corpses being piled into the back of a pickup vehicle and other charred bodies trapped amid the debris.

Floodwaters around the site hampered rescue and recovery efforts.

Officials at the nearby 37 Military Hospital said its morgue had reached capacity.

President John Dramani Mahama visited the scene, calling the death toll “catastrophic” and offering condolences to families of the victims.

“Steps will be taken to ensure that disastrous floods and their attendant deaths do not occur again,” he said.

Michael Plange, who lives a few blocks away, said many people had taken shelter under a shed at the station from the rain and were hit by the explosion.

The flooding “caused the diesel and petrol to flow away from the gas station and a fire from a nearby house led to the explosion”, said Billy Anaglate, spokesperson for Ghana’s national fire service.

In addition to the dead at the petrol station, local media reported that many drowned in various parts of the city following two days of torrential rains.

The combined death toll from the explosion and flooding is expected to rise.

The explosion is likely to intensify criticism of the government’s failure to improve the infrastructure.

Though the downpours this week have been especially bad, heavy rains in June are not unusual yet drainage systems in Accra remain inadequate.

The area where the blast occurred is a heavily trafficked section of central Accra with several banks and other offices in addition to residences.

Multiple bus terminals connect the area to the rest of the city.

Throughout Accra, drivers caught in the flooding abandoned their cars on the road.

The Education Ministry instructed all children who were not already at school Thursday morning to stay home.

The city is also grappling with an energy crisis resulting in blackouts lasting for as long as 48 hours in recent years, causing large-scale demonstrations drawing everyone from blue-collar workers to local film stars. 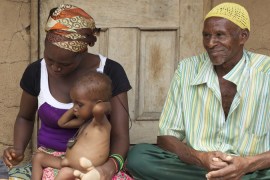 An undercover investigation into the disturbing theft and black market sale of international food aid in Ghana. 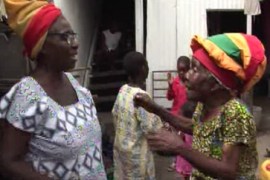 Voices from Ghana 50 years on

Al Jazeera talks to Ghanaians as the country celebrates independence.