By Phorn Bopha and Kevin Doyle

Phnom Penh, Cambodia – The first four refugees involved in a controversial $31m resettlement deal have been transferred from an offshore Australian detention centre to their new lives in Cambodia.

The four migrants, who flew into the capital Phnom Penh on Thursday, had been held in detention on the remote Pacific island of Nauru after attempting to reach Australia.

Cambodian officials say the migrants include a Rohingya man from Myanmar, two Iranian men and one Iranian woman, all of whom were granted refugee status on Nauru and had agreed to be moved.

The four refugees were whisked from Phnom Penh International Airport in a minivan, dodging waiting photographers and reporters, after their plane arrived at around 10:30am (03:30 GMT).

Lieutenant General Khieu Sopheak, spokesman for the Cambodian interior ministry, said ahead of the refugees’ arrival that they would be transferred to spacious accommodation in the south of Phnom Penh, consisting of three buildings within a single compound.

The compound is “even more awesome than my house”, Sopheak joked.

Australia signed the four-year resettlement deal with Cambodia in September to allow those granted refugee status in Nauru to permanently resettle in Cambodia, one of the poorest nations in Southeast Asia. The two countries, however, have struggled to find anyone willing to be resettled.

The UN and rights groups have criticised the deal, saying Australia should not be offloading its refugees to other nations.

No deal for Montagnards

The reception for the four is expected to contrast starkly with the treatment of about 97 asylum seekers from Vietnam who are currently in Phnom Penh, but are being denied access to the country’s refugee determination process.

While 13 Montagnards have been recently granted refugee status, Cambodian government officials have said they have no intention of extending the same status to the 97 who are currently sheltering in Phnom Penh.

“It seems sad that four people whom Australia has castoff are getting VIP treatment while 97 Montagnards who are much more vulnerable are not even registered,” said Denise Coghlan, director of Jesuit Refugee Service Cambodia.

“But, I am very happy that the Cambodian government will offer hospitality to the Rohingya and the Iranians [who arrived on Thursday] and will hopefully offer it to all those who seek asylum here and not only in Australia,” she said.

The Cambodian government’s historically close ties with Hanoi have always weighed upon the treatment of the Montagnards, members of ethnic minority communities that populate the Central Highlands region of Vietnam.

“Cambodia clearly has no will or capacity to integrate refugees permanently into Cambodian society,” he said.

“These four refugees [who arrived on Thursday] are essentially human guinea pigs in an Australian experiment that ignores the fact that Cambodia has not integrated other refugees.” 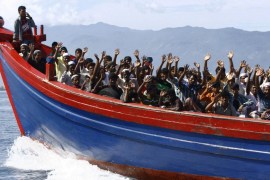 Four migrants held on Pacific island of Nauru have reportedly agreed to be moved to Southeast Asian nation. 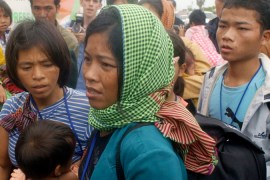 Cambodia under scrutiny over asylum seekers 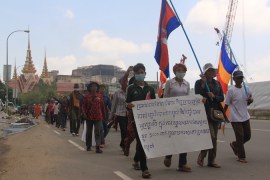 Several suicide attempts at a refugee camp in Nauru followed a resettlement agreement between Cambodia and Australia. 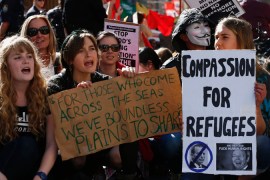