Tens of thousands have gathered in central Hong Hong to mark the 26th anniversary of China’s Tiananmen Square crackdown, which saw hundreds of pro-democracy protesters killed by security forces in central Beijing.

Six football pitches in Victoria Park were filled on Thursday with sombre crowds who held candles aloft as they paid silent tribute to the dead.

Organisers said that 135,000 had attended the commemoration.

Students later took to the stage and burned a copy of Hong Kong’s mini-constitution, or Basic Law, saying it “restricted democracy”.

Hong Kong is the only location on Chinese soil to commemorate the military’s crushing of pro-democracy protests in central Beijing in 1989.

Hundreds – by some estimates more than a thousand – died after the Communist Party sent tanks to disperse demonstrations at the square in the heart of Beijing, where student-led protesters had staged a peaceful seven-week sit-in to demand democratic reforms.

The US called for “an official accounting of the victims” of the 1989 crackdown on Thursday, as well as the release from prison of those serving Tiananmen-related sentences.

The US State Department also urged a halt to the harassment and detention of those who want to commemorate the anniversary.

Chinese Human Rights Defenders, a US-based group, said state security had detained dozens of activists in the Chinese provinces of Shaanxi and Hunan in advance of this year’s anniversary.

Zhang Xianling, 77, whose then 19-year-old son was killed during the crackdown, said she visited his grave in Beijing on Thursday, where dozens of plainclothes security staff stood watching.

More than seven security officers remain near her apartment, with two guarding her door, she told AFP news agency.

In Taiwan, prominent former student leaders who were at Tiananmen – Wuer Kaixi and Wang Dan –  spoke to a crowd of hundreds in the capital Taipei, some of whom carried yellow umbrellas, the symbol of Hong Kong’s pro-democracy movement. 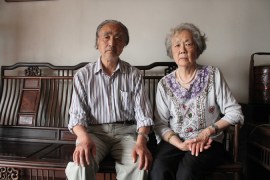 Having lost her son 24 years ago in China’s deadly military crackdown, a retired professor continues to demand justice. 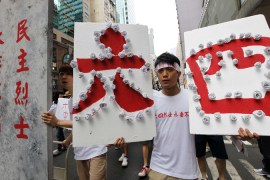 Father of Tiananmen protester kills himself

Support group says Ya Weilin had failed to get government redress over son killed in 1989 crackdown on student protests.