Canada’s spy-agency’s powers have been dramatically expanded allowing it to operate overseas for the first time.

Parliamentarians passed a bitterly contested anti-terror law on Wednesday, in response to the country’s first terror attack on Canadian soil in October. A gunman killed a ceremonial guard and entered parliament, and a soldier was run over in rural Quebec.

The House of Commons pushed through the bill on Wednesday with a 183 to 96 vote, after several failed opposition attempts to water it down.

The bill still requires a final nod of royal assent in June where it is likely to be passed.

As part of its new mandate, Canadian Security Intelligence Service’s (CSIS) could intercept financial transactions, prevent a suspect from boarding a plane, intercept weapons or conduct “online counter-messaging”, for example, by hacking a Twitter account used to recruit jihadists.

The government insists the new measures target “terrorists” and not law-abiding citizens.

“Thousands of Canadians took to the streets to protest this bill which will erode our rights and freedoms,” Randall Garrison, an MP for the NDP, said.

“These people don’t want fear to triumph over the values that guide our democracy.”

A recent Forum Research poll showed more than half of Canadians are opposed to the enhanced national security measures, while only one-third endorse them.

The act marks the biggest overhaul of Canada’s anti-terrorism legislation since 2001, when the government rushed through new national security measures following attacks in the United States.

Four former prime ministers and top judges have led the criticism, joined by aboriginal chiefs and
environmentalists who fear being targeted by police in the crackdown. 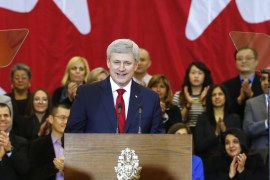 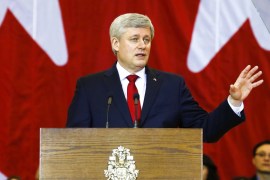 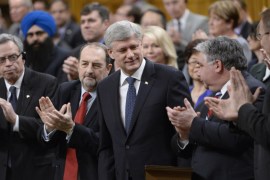 Both Canada and Israel have national mythologies that perpetuate their status as kinder, peace loving democracies. 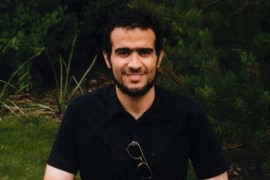 Omar Khadr, accused of killing a US soldier in Afghanistan as a child, was granted bail while he appeals conviction.