Two years since the removal of ousted President Mohamed Morsi from power, Egypt has swung from “mass protest to mass incarceration”, according to a new Amnesty International report.

According to the report, activists estimate that 41,000 people have been arrested, charged or indicted, often through unfair trials where evidence consists solely of statements by security forces.

The report’s researchers emphasise that the Egyptian society has seen its avenues for free speech and protest clang shut as the government under President Abdel Fattah el-Sisi seeks to stifle scores of activists, politicians and youth in the name of state security.

The report focuses on 14 young people who were among the thousands that have been subjected to arbitrary arrests and practices “which do not comply with international law”.

The authorities’ repression of dissent and opposition originally began with the jailing of Muslim Brotherhood leaders and their supporters. Now, however, its scope has reached university campuses and public streets, family homes, and the offices of human rights groups.

“Egypt today is a police state,” said Nicholas Piachaud, a researcher on the Egypt team for Amnesty International. “People are deeply afraid of the knock on the door in the night,” Piachaud told Al Jazeera.

For the youth in the country, who once enjoyed global praise for being the pulsing centre of Egypt’s protest movements, the crackdown has been an overwhelming source of fear and despair.

One young man, Mohamed Ahmed Hussein, was just 18 years old when he was arrested for wearing a T-shirt with a political slogan on it. He has now spent 500 days in prison without charge or trial, and his family says that his body carries the marks of torture.

“The authorities have made it clear that now, what they wish to do is tear the heart out of the protest movement,” Piachaud said. “It’s their way or prison.”

Recent reports of disappearances have only added to the atmosphere of fear.

On June 9, the National Council for Human Rights, a government-run entity, received 50 complaints lodged by families who suspect their loved ones are being detained with no way of communicating with the outside.

“One family of a detained individual that we spoke with said that what they’re going through is awful, but what’s happening with the recent disappearances is terrifying,” said Piachaud.

In line with the country’s Code of Criminal Procedures, accused persons in Egypt may be held without trial for up to 45 days, a period that courts can extend after review.

According to the report, the law has led to some suspects going without trial for over a year.

The authorities have made it clear that now, what they wish to do is tear the heart out of the protest movement.

When the trial does come, it can involve unfair practices that warp due process and subject the defence party to incomplete evidence, sudden changes in the hearing’s location and even threats against lawyers.

One particularly “farcical” hearing, said the report, sentenced the defender to jail in absentia and featured home videos as evidence.

Yara Sallam, a prominent human rights defender, is another person charged with taking part “in an unauthorised demonstration that endangered public order”.

Her lawyers say that Sallam did not participate in any such demonstration, and had been arrested while buying water at a kiosk.

On the day of Sallam’s trial, officials changed the address of the hearing location without notifying the defence lawyers.

Sallam and her lawyer had to travel 25km to the new location, where a tinted sheet of glass prevented her from communicating with her defence counsel throughout the trial.

Though Sallam is one of the more well-known individuals prosecuted by authorities, repression in Egypt is not limited to only the prominent voices.

According to the report, innocuous acts by people – such as wearing the wrong shirt, or walking down a street where a demonstration is happening – can lead to detentions and jail time.

The already shrinking political space in Egypt is subject to regulations that severely limit when and where demonstrations may happen.

Passed in November 2013, the Protest Law requires any public demonstration to have prior approval from the interior ministry, and permits security forces to use excessive force in dispersing protesters.

The government justified these restrictions by saying that it was restoring stability to the country, invoking recent attacks on security and police forces.

Yet, the report noted that often, if demonstrations do see violence at the hands of one or a few protesters, forces will indiscriminately arrest anyone in the area.

According to Piachaud, this has sucked the air out of all public dissent in society.

Meanwhile, the report highlights that Egypt’s international partners have been passive about the matter, choosing to welcome Sisi back into the political fold instead of denouncing the intensifying repression.

The international community, says Piachaud, was silent when Egyptian security forces killed hundreds of protesters in August of 2014, and that silence stretches on today.

“Egypt‘s partners are saying they do care about human rights, but on the other hand they‘re selling and transferring hundreds of millions of dollars worth of military and security equipment to Egypt‘s government,” he said. “This is sending a very dangerous signal to the authorities.” 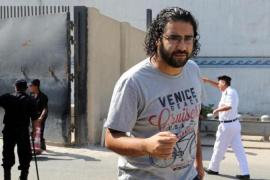 Alaa Abdel Fattah and 24 other defendants are sentenced in absentia to 15 years in jail for violating protest law.