Iran and six world powers have ramped up negotiations after accepting they would miss a June 30 deadline for a nuclear deal, with both sides cautioning that major obstacles to a lasting agreement remained.

Mohammad Javad Zarif, Iran’s foreign minister, returned to Vienna with the country’s nuclear chief, Ali Akbar Salehi, for talks on Tuesday after consultations with the leadership in Tehran.

“I am here to get a final deal, and I think we can,” said Zarif.

Zarif and Salehi held private discussions with John Kerry, US secretary of state, as they awaited for the arrival of the foreign ministers of France, Germany, Britain, Russia and China.

“When they did the interim deal in Lausanne, he was very helpful to that process,” said Bays.

Diplomats said the Vienna talks would run on for as long as necessary to reach a deal intended to promise an end to sanctions in exchange for at least a decade of limits on Iran’s most sensitive nuclear activities.

“There are real and tough issues that remain which have to be resolved in order to get the comprehensive agreement, and we still do not know yet whether we will be able to get there,” a senior US administration official said on Tuesday.

For more than a week, the US, Britain, France, Germany, Russia and China have been working into the night with Iran trying to break an impasse in talks that they feel have never been closer to concluding positively.

Diplomats have said the real deadline is not June 30 but July 9, the latest that the deal can be presented to the US Congress if a mandatory review period before US President Barack Obama can begin suspending sanctions is to be limited to 30 days.

After that, the review will last 60 days, with growing risks that the deal could unravel.

Suzanne Maloney, a senior fellow at the Centre for Middle East policy at the Brookings Institution, told Al Jazeera from Washington DC that the process would not end with that.

“What we would need to actually lift the bulk of the sanctions regime is to see some significant steps by the Iranians to ensure that there is a considerable distance between them and the breakout capacity for a nuclear weapon,” she said.

The main differences are on the pace and timing of sanctions relief for Iran, and on the nature of monitoring mechanisms to ensure it complies with the deal.

A big sticking point is Western demands that UN inspectors have access to Iranian military sites and nuclear scientists.

Western diplomats say they are nearing a resolution, although Iranian officials maintain that access to military sites is a red line set by Supreme Leader Ayatollah Ali Khamenei.

The US official said the six powers had come up with a system to ensure that the International Atomic Energy Agency would have the necessary access, though there was no suggestion the Iranians had agreed to this.

The West and its allies suspect Iran may be developing technology that would allow it to build nuclear weapons under cover of a civilian atomic energy programme, but Tehran says its ambitions are strictly peaceful. 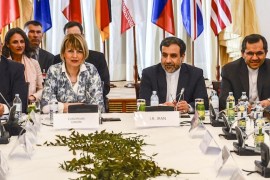 Expert says Iran and its rivals may enter dangerous territory if talks under way in Vienna fail to cover the major gaps.