A solar-powered aircraft has now passed the point of no return on a record-breaking attempt to fly across the Pacific Ocean from Japan to Hawaii.

The team behind the Solar Impulse 2 were forced to wait almost two months for a break in the weather.

The plane, which has a wingspan bigger than a jumbo jet, took off from Nagoya Airfield in Japan at 18:03 GMT on Sunday. On Monday morning it was off the east coast of Japan and, all going well, it is scheduled to land in Hawaii in approximately 120 hours.

Live video from the cockpit of the plane is being broadcast on YouTube, and shows the pilot André Borschberg wearing an oxygen mask and thick flight clothes to protect him from the cold.

Solar Impulse 2 left Abu Dhabi on the March 9and has since flown seven legs of 13 in an attempt to be the first single manned solar-powered plane to fly around the world.

The plane is powered entirely by the 17,248 solar panels on its wings.

The five-day leg from Japan to Hawaii is regarded as the most challenging part of the journey.

“If we did a five day flight across a continent and we encountered any problems – be it weather, operational issues, there’s an alternate airport we can land,” the project’s managing director Gregory Blatt told Al Jazeera.

If successful, the 120-plus hour flight to Hawaii will be the longest solo flight in aviation history. It will also break records for being the longest distance flown by a aircraft powered only by the sun. 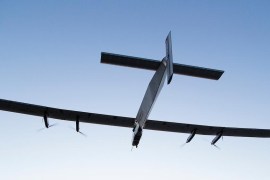 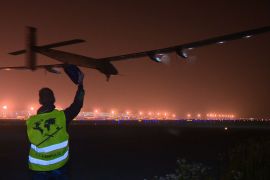 Solar Impulse 2 is attempting to fly 8,000km from Nanjing to Hawaii in an extreme test of endurance and new technology.