Burundians have voted for a new parliament after a night of sporadic blasts and gunshots and weeks of violent protests against President Pierre Nkurunziza’s attempt to win a third term in office.

The polls closed at 5pm local time and “the elections went well”, Prospere Ntahorwamiye, a spokesman for the electoral commission, told Associated Press. He said counting would start immediately and the results would probably be announced on Tuesday.

There was heavy security across the capital, Bujumbura, which witnessed low turnout.

About 3.8 million people had been expected to vote, according to the electoral commission, but it appears a boycott by 17 opposition groups kept the turnout low, especially in Bujumbura.

Al Jazeera’s Haru Mutasa, reporting from a polling station in the capital Bujumbura, said the atmosphere was filled with fear and tension on Monday morning, with many fearing a continuation of the violence that has marred the lead-up to the elections.

She said there were delays reported at several polling stations across the country following violence.

“There aren’t many people here, I would say around 50. Several polling stations were attacked and there was gunfire overnight,” she said, adding extra police had been brought in to conduct searches on those voting.

“Polls will open late in many places because some people have thrown grenades and police are sorting things out,” Al Jazeera correspondent said earlier in the day.

“When asked, people say all they want is politics out of the way and out of their lives, they fear there could be potential for a lot of violence after the elections. Many people are crossing the border out of the country as we speak.

“Some people who support the president are saying they want to come and vote but they’re scared… They say some opposition members could victimise them because they vote.”

The voting took place despite calls by the international community for a postponement until there is a peaceful environment for credible elections.

On the eve of the polls, he African Union (AU) said it will not observe the elections.

Police in Burundi said that several polling centres were attacked overnight, with no damage caused to electoral materials.

The US said it was “deeply disappointed” at Burundi’s decision to go through with the elections.

On Sunday, the UN Secretary-General Ban Ki-moon showed his concern at “the government of Burundi’s insistence on going ahead with elections”.

The opposition boycotted Monday’s vote and will also boycott the presidential election on July 15. 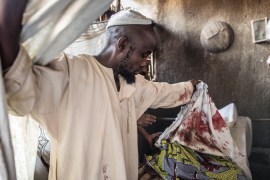 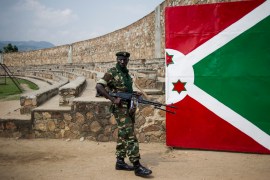