Iran and the six major powers of the “P5+1” group are pressing forward in final negotiations over Iran’s nuclear programme, with different deadlines staggered from end of June to early July.

While the prospect of the talks’ success hovers overhead, many ask how Gulf leaders may respond to a final agreement, which would present a possible balm for previously tense relations between the US and Iran.

For GCC states, negotiations between Iran and the US – and the thaw in relations that might follow – signify a shift in regional policy that has historically featured US ties with Gulf nations at front and centre.

There is a perception among Gulf power circles that the US is taking sides with Iran, working to strike a nuclear deal before Obama finishes his term in office.

This line of thinking has prompted many to speculate that the Camp David Summit on May 14, which featured the gathering of US leaders with their Gulf counterparts, was an attempt by the US to demonstrate its commitment to its Gulf allies.

Yet, even as the US seeks to reassure GCC states of their shared common interests in the region, a gap has wedged itself between the political outlooks of the US and its Gulf allies.

For the US, foreign policy in the region has emphasised the so-called “war on terror” and, more recently, efforts to curb the expansion of the Islamic State in Iraq and the Levant (ISIL) group.

And while Gulf nations recognise the threat that ISIL poses, they are also grappling with a series of security challenges stemming from sectarian tensions that has blanketed the region.

From the GCC perspective, it is imperative to tackle the alarming instability that has not just appeared in Syria, Iraq, and Yemen, but is also present in certain parts of Gulf states with Shia populations.

The deteriorating situation in Yemen, where many GCC states have found themselves fighting Houthi militias, is an additional challenge.

For the GCC, the perceived conclusion to this scenario is Iran emerging as the winner and rising to dominate the region. This is not an acceptable outcome.

In order to counteract this change, Gulf states might seek to strategically acquire their own peaceful nuclear capabilities if Iran is permitted to do the same.

Gulf leaders must balance these concerns with their interest in keeping the US – a key figure in guaranteeing security and stability in the region – as an ally. On the ground, however, countries like Saudi Arabia have started thinking of alternatives.

Saudi Arabia has found a possible third path through relations with Russia and France, countries that could aid Saudi in minimising the damage of a nuclear agreement.

Saudi Deputy Crown Prince Mohammed bin Salman’s recent visit to Russia, and his subsequent signing of several commercial and defence agreements that included the building of 16 peaceful nuclear reactors in Saudi Arabia, demonstrate that the new Saudi leadership is working on diversifying alliances and political strategies.

Such an approach to international politics suggests that Saudi Arabia is strongly invested in protecting its own interests and preserving regional stability, even as it continues its indispensable relationship with the US.

RELATED: How can the GCC uproot ISIL?

Despite their historical basis, relations between the US and Gulf states suffer from deep trust issues that have steadily worsened over the past decade due to the US’ approach to the Iranian nuclear programme.

But these relations could be mended if both sides took certain steps that include the following:

– A comprehensive defence agreement between the US and the GCC in which the US commits to supporting GCC countries in response to any threat to their security, sovereignty, and independence.

an internal threat from organised groups within their countries.

– The US working with Gulf countries to support and enhance their defensive capabilities.

– An increase in cooperation between GCC countries and NATO that goes beyond the Istanbul Cooperation initiative.

Moreover, all parties need to recognise that Iran plays a part in regional power structures and conflicts in Lebanon, Syria, Yemen, and Iraq, and therefore any regional settlement must include Iran.

Iran and the Gulf states could enter into direct dialogue in order to discuss these regional problems and reach settlements that would satisfy all parties, with the addition of the US in a possible broker role.

The US, given its current position in nuclear talks with Iran, could add pressure on Iran to respond to conflicts in Yemen, Syria, and Iraq and reach political solutions before the conclusion of a nuclear agreement.

Such a scenario would help the Obama administration achieve real progress in bringing stability to the Middle East. 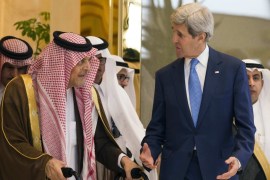 Obama, will it be Iran or the GCC?

Camp David might be a first step towards changing GCC perceptions of the US commitment in the Middle East. 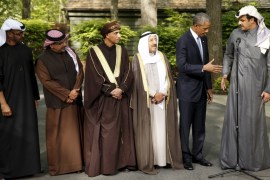 Obama to back Gulf allies against any ‘external attack’

President makes remarks at end of US-GCC summit at Camp David amid Arab anxiety over efforts for nuclear deal with Iran.