The police appeared intent on stopping the crowd gathering near Taksim Square on Sunday, a cameraman for the Reuters news agency reported.

Images and videos posted on social media showed several people carrying gay pride flags running away while being fired upon by a water cannon mounted on an armoured police vehicle.

As of 1400 GMT, the protesters have left Taksim Square and the nearby Istikal Street, and the city is “back to normal” according to our correspondent.

In an interview with Al Jazeera, photojournalist Bradley Secker, who is at the scene in Taksim, said the gay pride marchers were “puzzled” by the police action, given that a similar parade on June 21 went on in Istanbul without any incident.

No official comment has so far been issued by the government, but there were reports that the parade was stopped as it was Ramadan.

However, Karajan said the parade, which has been held over the past 13 years without police intervention, occured peacefully during Ramadan last year.

Taksim is a traditional rallying ground for demonstrators and saw weeks of unrest in 2013. 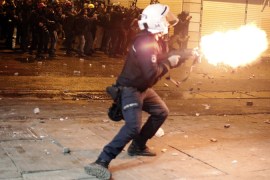 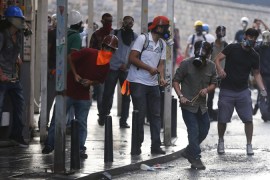 Riot police dispersed protesters in Istanbul who gathered to enter Gezi Park, which was closed hours after reopening. 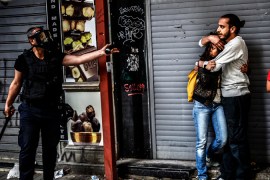