Kujira, which at its most active was a tropical storm, left the South China Sea for Vietnam on Thursday. Much of the country north of Quang Bình Province felt the force, not of wind, which was negligible, but of rain, which was not.

The wind at sea was still of note, early on Wednesday, with gusts of 144km/h on the island of Bach Long Vi. By the end of the day, the Red River Delta, although swept by the wind, saw no more than 80km/h as Kujira concentrated more on dumping rain inland.

The place that recorded the most rain for this period is up in the hills, Don La, with a total of 280mm. The hills don’t just absorb this amount of rain, they shed water into the gulleys which turn into roaring torrents and flash floods.

Reports from Son La province list 20 houses as washed away in a flash flood, and at the time of writing, several people have lost their lives to the water and a few are still missing.

Vietnam is prone to flooding, yet the Red River Delta is highly populous and is a rich agricultural and aquacultural environment. The Red River, or in Vietnamese, ‘Song Hong’, ultimately leads to and flows through Hanoi, the capital of the country.

Kujira has now dissipated as a tropical depression, but its thunderheads will continue rumbling in the hills well into the night. 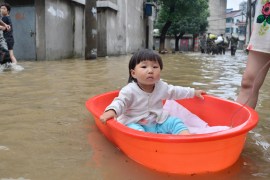