Security sources confirmed that Aytac Baran, from the Yeni Ihya Der aid group, was killed as he left his office in the southeastern city of Diyarbakir on Tuesday.

The violence adds to tension in Turkey’s largest Kurdish-populated city where three people were killed in an attack on a political rally last week, in the final days of the election campaign.

The killing of Baran triggered clashes between his supporters and supporters of the Peoples’ Democratic Party (HDP), with the former accusing the HDP of being behind the attack, an AFP reporter said.

But the left-wing, pro-Kurdish HDP, which made a strong showing in Sunday’s general election, strongly condemned the attack in a statement and called for a thorough investigation.

“A dirty scenario is at play. All parties should act with common sense,” Demirtas wrote on Twitter.

Baran had been threatened by the outlawed Kurdistan Workers’ Party (PKK) shortly before his killing, his lawyer said in a statement quoted by Turkish media.

The youth wing of the PKK, the YDG-H, issued a Twitter message denying any involvement in the attack, which it called a “provocation”.

The HDP cleared the 10 percent threshold to enter parliament as a party for the first time in the elections that saw the ruling AK party losing its majority.

Turkish President Recep Tayyip Erdogan’s office said on Tuesday he had accepted the resignation of Prime Minister Ahmet Davutoglu’s government to allow for the formation of a new government.

Erdogan is now expected to give Davutoglu the difficult task of forming a coalition government.

Opposition parties have vowed to resist any pact with the ruling party. They are likely to demand limitations on Erdogan’s role in government, complicating any coalition talks.

Tuesday’s resignation is part of the political custom and the government will stay in office until a new one is set up. 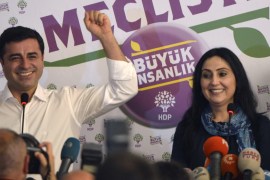