Thailand’s military government has said it will hold a meeting for 200 local and international journalists to teach them how to ask “constructive questions” and “not distort facts”, the Bangkok Post newspaper reported.

“There has been no order from any of my bosses, but it is my duty to build healthy relationships and mutual understanding with the media,” Army Signal Department Commander, Lieutenant-General Suchart Pongput, told the newspaper.

According to the article, Suchart said the idea for a meeting between police, soldiers, and reporters came about after conflicts between officials that were caused by journalists’ questions.

“We just don’t want such things to happen again,” he was quoted as saying.

Al Jazeera has not yet been able to ascertain whether its journalists will be among those invited to the meeting.

Thailand’s military dictatorship, which celebrated its first year in power on May 22, has been quick to stamp out dissent.

Hundreds of protesters and vocal critics of the regime have been arrested in the past year while local media has become increasingly censored and self-censored.

Prime Minister Prayuth Chan-ocha, the army chief when he came to power, has long had an icy relationship with the media.

On repeated occasions, Prayuth has lashed out against the media and threatened to shut down critical outlets, while earlier this year he said that he would probably “just execute” journalists that “did not report the truth”.

While he later wrote it off as a joke, in an interview with Al Jazeera he insisted that: “The media needs to be reformed. I have to advise them. I have to tell them what they can and what they cannot do.”

“It’s quite clear that the [military government] doesn’t understand the concept of a free press and that the only news that they like is the news that follows their line,” he said.

“[It’s] a regretful and sad state of affairs [that] a country, which five or 10 years ago we probably would have said was most free in Southeast Asia in terms of media, has been dragged so far back.” 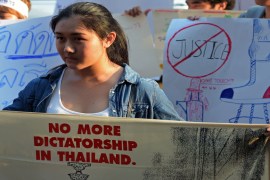 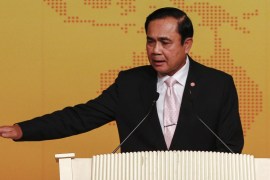 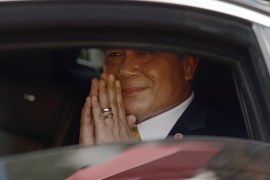 Thai PM: I will pack my bag and go home after election